The National Weather Service in Chicago issued a Winter Weather Advisory for a good portion of the Chicago area, calling for a wintry mix of freezing rain, drizzle and wet snow beginning Monday evening.

After spreading north and east, the system then will change over to all snow Tuesday, accumulating three to six inches in counties along the Illinois-Wisconsin border, with lesser amounts south. Snow should end from the west later Tuesday evening.

The Winter Weather Advisory will be in effect for the bright purple counties from 9 p.m. Monday until 4 p.m. Tuesday. Dangerous travel conditions will exist with slick and eventually snow-covered roads and highways.

Plan on slick roads as some freezing rain may mix with snow Tuesday night, and hazardous conditions could impact the commute Tuesday morning. 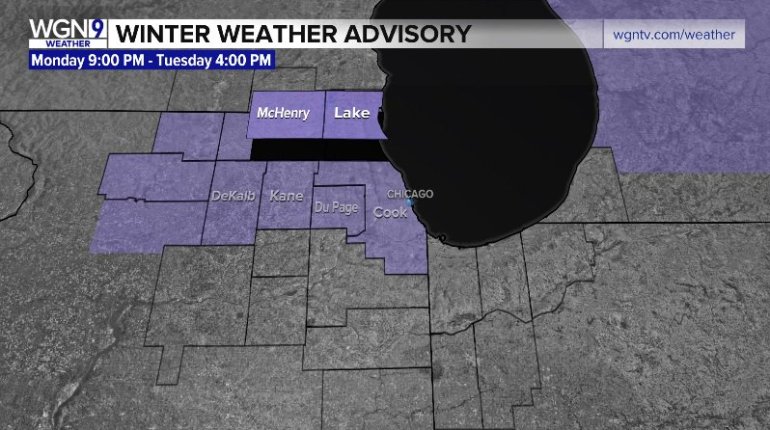 With cold air in place over the Chicago area, low pressure will move northeast out of Kansas, tracking over Chicago early Tuesday. A broad area of cloudiness and light freezing rain or drizzle should develop over our area out ahead of the approaching weather system from south to north and east, with the greatest threat of a prolonged period of frozen precipitation and wet snow north of Interstate-80 Monday night into Tuesday.

As the low pressure pulls away to the east Tuesday, northwest winds will strengthen, gusting over 35 mph and snow will gradually end from west to east Tuesday evening.

A Winter Weather Advisory is also in effect for the bright purple counties in the map below, from 6 p.m. Monday until  9 a.m. Tuesday. A mix of light freezing rain and snow is expected, with accumulations of 1-3″, including the highest amounts in the northern part of the region. Ice accumulation may top 0.1″ as well.

Plan on slick roads in this area as well, likely impacting the Monday evening and Tuesday morning commutes. 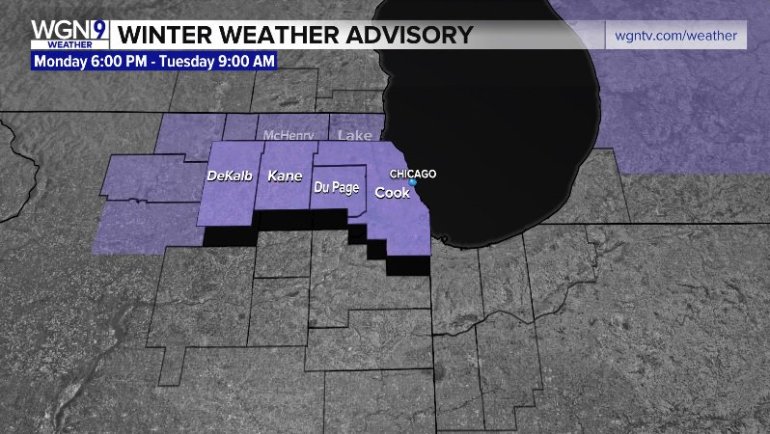 Lake breezes to temper heat a bit through the weekend, especially in shoreline areas, but hot weather to intensify next week—extended spell of 90s ahead with minimal area-wide rain chances

On March 27, 1884, a storm blew a runaway train from Akron, Colorado to Max, Nebraska. Was it a tornado?

On March 27, 1884, a storm blew a runaway train from Akron, Colorado to Max, Nebraska. Was it a tornado? Do you have any details?

Hot pattern locked into place and showing no sign of letting up anytime soon—heat may intensify late next week when readings could be within striking distance of triple digits. Cooling lake breezes to bring minor relief to Chicago shoreline areas through early next week