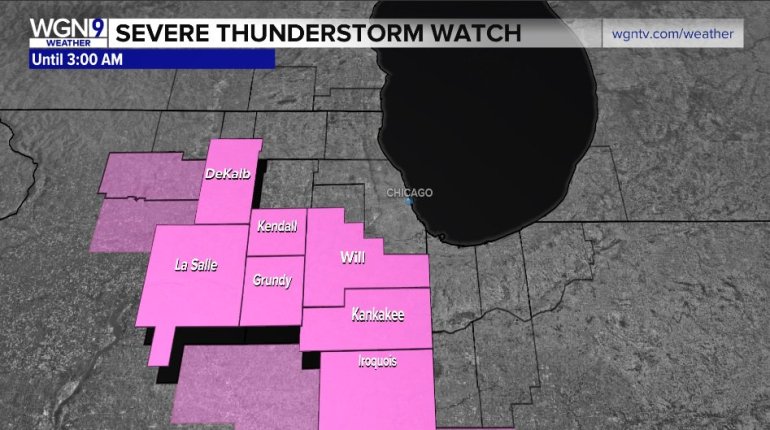 A Severe Thunderstorm Watch has been issued for several counties as another round of storms begins to develop.

DeKalb, LaSalle, Lee, Ogle, Grundy, Kankakee, Kendall and Will counties are under the watch until 3 a.m.

A Severe Thunderstorm Watch is in effect until 3AM for the pink highlighted IL counties. A Watch means conditions are favorable for severe storms. Damaging winds, large hail are the main threats with frequent lightning & heavy rain. #ilwx pic.twitter.com/HuO7XKWdtE

Watch runs until 3AM and covers some SW & S suburbs as well as rural locations in DeKalb, Will, Grundy, Kendall & Kankakee Counties. Watch down not include the city of Chicago. #ILwx #INwx #IAwx pic.twitter.com/RCpTCHQLfk

Earlier Thursday, storms moved across the Chicago area, prompting watching and warnings throughout the midday hours.

Activity in the skies made for remarkable visuals throughout the day.  Several residents shared images on social media.

Get the horses, she’s about to get nasty ⁦@WGNNews⁩ pic.twitter.com/O9hDria715

Check this spectacular shelf cloud NW of Waterman (Dekalb county) as the storms rolled through. Thanks to @JWillsWeather for the shot! @WGNNews @MikeJanssenWX @DIvory_WGN pic.twitter.com/Wdl7hqLMwf

Weather service officials said it was too soon to confirm reports of multiple tornado sightings along the storm’s path.

All County Flash Flood Warnings/Flood Advisories have expired as the sun sets in the west this Monday evening. The areal coverage of showers and thunderstorms will be shrinking fast from this point on, although a few locations may be slower to clear than others.

At 8:30PM CDT moderate showers/t-storms were concentrated south and west of Joliet in Grundy, Kendall and Will Counties.  Activity was weakening rapidly elsewhere.

Flood Advisory in effect until 8PM CDT for portions of Kendall, Will, Kane, DuPage and Cook Counties in northeast Illinois