Climatologically, Chicago has passed its coldest time of the year, as temperatures typically reach their minimums around the third week of January. Average daily readings usually begin a slow climb after that.

So far, January 2020 has been dominated by mild air, and is currently running 6 degrees above normal. Through Monday, only six of 27 days were below normal, with just one day posting a double-digit deficit.

Nighttime temperatures have been particularly mild, averaging more than 10 degrees above normal since January 21, due in large measure to extensive clouds. 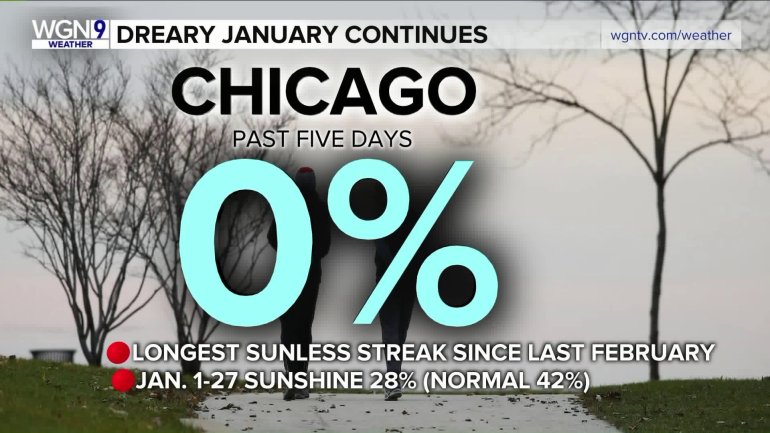 With the exception of the 21st, the past seven days have been dismal, with little or no sunshine received. At night, clouds inhibit heat loss.

Mostly cloudy skies are expected through the end of the month, so more mild days are forecast. Southwest winds during the opening days of February should disperse most clouds, while bringing a surge of very mild air.

For the latest forecast and more visit wgntv.com/weather.

Shifting jet stream sets the stage for a milder overall pattern; short-lived cold air incursions can’t be ruled out, but above normal temps may dominate into mid-month; Sunday’s predicted 6-degree afternoon high would be 2020’s warmest to date

Chill to ease as February comes to a close

February’s closing days have been quite chilly with highs holding near or below freezing, despite sunshine and minimal snow cover. However, a warm-up begins Saturday as the mercury heads toward 40 and arrives with a flourish on Sunday as readings surge into the middle 50s on the first day of March as well as meteorological spring. However, the warmth will be short-lived as a cold front drops temperatures back into the lower and middle 40s Monday where they will reside for the rest of the work week. Northeast winds will accompany the cooler weather keeping lakeside readings closer to 40  on most days. No major precipitation is expected, though some light showers are possible mid-week, especially south of the city.  Another warm-up appears to be on tap for next weekend with readings expected to again climb into the 50s.

My father always talks about a tornado that hit the southeast side of Chicago near 87th and Cottage Grove in the 70s or 80s. Can you provide any details?

Mix of sun and clouds Precip: 5%

Offering rehab instead of jail time, 'Drug Court' gives some a second chance