CHICAGO — This is no trick, or treat: An unusual October snowfall created a messy and slick morning commute on Halloween.

Winter Weather advisories were issued until early Thursday evening for several counties across the area. And for Friday, frigid air is set to move in.

Snow will fall for most of the morning, with rain showers southeast and into Northwest Indiana. The heaviest snow for Chicago will fall between 12-4 p.m. and will wrap up around 6 p.m. in Illinois and between 7-8 p.m. in NW Indiana. Gusty winds throughout the day, up to 40-50 mph, will keep wind chills in the teens and 20s, with temperatures in the lower and middle 30s. 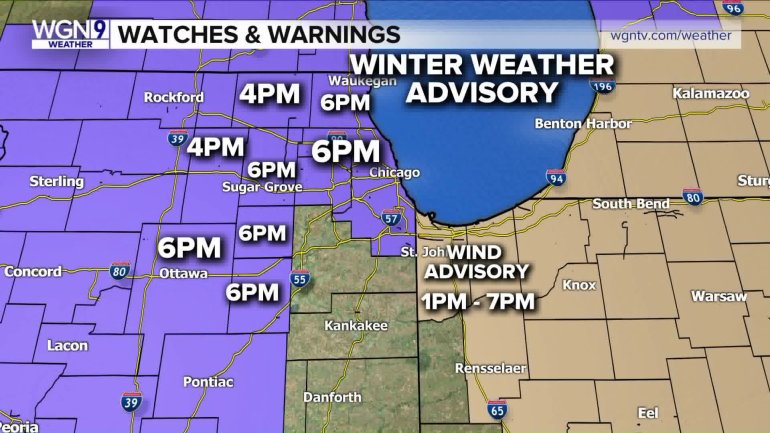 Near Chicago’s lakefront and south will see 0-2″ of accumulation, including NW Indiana. 2-3″ of snowfall is expected near the Chicago airports and southwest of there, and north/northwest areas could see as much as 3-5″ of snowfall.

Measurable snow has fallen officially on Halloween just once before, since snow records began in 1885 (0.1” in 2014) but this year appears likely to obliterate that record.

Accumulating snow on area roadways is creating slick driving conditions, and has already caused a number of accidents. Allow extra time and drive with caution.

The Illinois Tollway has deployed its full fleet of 196 snowplows.

The snowy weather has also forced some Chicago-area communities to postpone Halloween trick-or-treating to Friday and Saturday.

The spring preceding the drought of 1988 compared to Spring 2021

Dear Tom,It’s been very dry in Chicago this spring. How does this spring’s precipitation compare to spring 1988 which preceded our drought summer?—Chris V. WilmingtonDear Chris,Through April 15 this spring has been much drier, recording just 1.88 inches of precipitation, just half of the 3.75 inches that fell in 1988. The entire March-May 1988 spring period was extremely dry and provided the antecedent conditions for the city’s benchmark hot, drought summer that followed. It logged just 5.42 inches, more than 4 inches below normal, and ranks as the city's 11th-driest. That summer, Chicago logged a record 47 days 90-degree plus that included a record seven days of triple-digit heat. Nearly half of the Lower 48 experienced extreme drought, resulting in devastating crop losses and a price tag estimated between $80 billion and $120 billion.