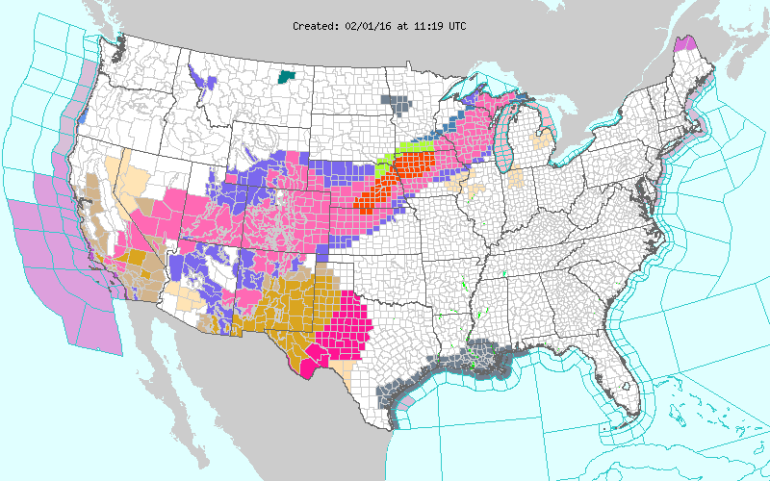 Winter storm Warnings are in effect from the southern Rockies through the central plains into the western Great Lakes. Several feet of snow is forecast for the mountains of Utah and Colorado today with up to a foot of snow/blowing and drifting snow from sections of Nebraska across northern Iowa/southern Minnesota into Wisconsin and Upper Michigan later tonight through Tuesday/Tuesday night (see highlighted areas on map above – pink-shaded depicted Winter Storm Warning for heavy snow and red-shaded areas depict Blizzard conditions with near zero visibility at times).

Tuesday the Chicago area will transition from the unseasonably mild rain/thunderstorm area in our southern portions to possibly 1 to 3-inches of snow accumulation in our northern counties along the Illinois-Wisconsin state line Tuesday morning. By midday Tuesday, most of the Chicago area looks to be in milder air/rain. Across southern Wisconsin 4 to 6-inches of snow may fall Tuesday, while to our south all the way from the Gulf of Mexico into southern/central Illinois/Indiana will be under a threat of severe thunderstorms.

A center of low pressure is expected to assemble over the southern Rockies, coming together into a single storm center over eastern Kansas early Tuesday – then following a northeast track from near Kansas City to Chicago by evening and on into northern Lower Michigan Tuesday night. Strong northwest winds on the backside of the departing low pressure will pull much colder air into our area later Tuesday night/Wednesday with some light snow showers or flurries possible.

Isaias batters the East Coast with damaging gusts, tornadoes, and flooding rains. Driest air mass in 2+ months here leads to comfortable stretch of weather, but heat and humidity poised to return this weekend and extend into next week

What is the concentration of carbon dioxide in the atmosphere?

Dear Tom,Carbon dioxide in the atmosphere is increasing. What is its concentration now?Jamie Confrist, ChicagoDear Jamie,Carbon dioxide is a heavy, colorless, odorless gas and it is the fourth most abundant constituent of dry air. By volume it occupies only about 0.04 percent of dry air. Though only a minor constituent of the atmosphere, its presence is meteorologically important because it strongly absorbs and emits long-wave infrared radiation that greatly influences the temperature of the atmosphere. Because of that property, it is one of the so-called "greenhouse" gases. It is released into the atmosphere as one of the by-products of combustion. In 1860 atmospheric carbon dioxide concentration was 288 parts per million (ppm), 332 ppm in 1980 and about 414 ppm now.

For the latest forecast and more visit wgntv.com/weather.