CHICAGO — A big winter storm could bring dangerous conditions to Chicagoland as we head into the weekend.

A Winter Storm Warning is now in effect until 3 p.m. Sunday for McHenry and DeKalb counties.

Wintry mix of freezing rain and sleet is possible in northwestern counties and that mix will move southeast across the area Saturday. Mix transitions to snow late Saturday afternoon and evening.

A Winter Weather Advisory has been issued for northern Illinois and the Chicago area starting early Saturday morning. 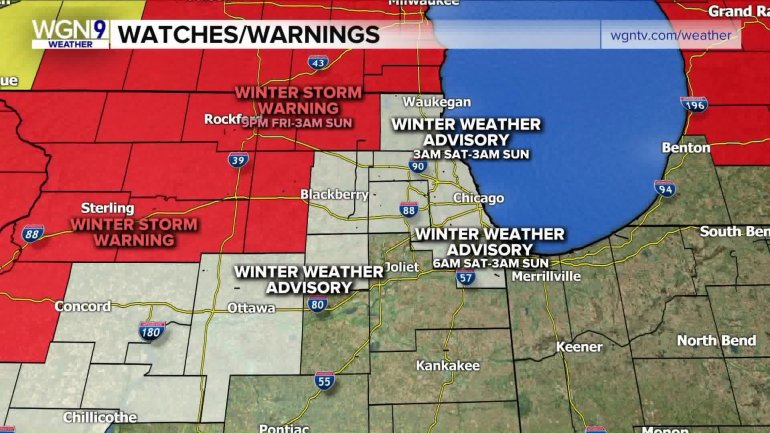 A Lakeshore Flood Warning has been issued Saturday at 12 a.m. until Sunday at 6 a.m. for green counties (see map below.) NNE winds gusting 40-50 mph build waves 12-18' occasionally up to 23'. Lakeshore flooding could cause significant beach/shoreline erosion. Structures along shore may be damaged.

Lakeshore Flood WARNING Sat 12AM-Sun 6AM for green counties. NNE winds gusting 40-50 mph build waves 12-18' occasionally up to 23'. Lakeshore flooding could cause significant beach/shoreline erosion. Structures along shore may be damaged. Paths/roads along the lake may be closed pic.twitter.com/AhXn94Fy9x

The Chicago Park District has closed part of the lakefront trail to walkers, bikers and runners due to high waves and slippery conditions. The trail is closed from just south of Fullerton to Ohio ahead of the approaching winter weather.

A Flood Watch in also in effect from 6 p.m. Friday to 6 p.m. Saturday for green counties (see map in tweet below.) Moderate to heavy rainfall is expected Friday through Saturday morning. A total of 2 to 4 inches rainfall may cause flooding of streams, rivers, roadways and low lying areas.

There’s also concerns this could cause significant flooding along the lake as well as erosion.

Some areas like Rogers Park have experienced beach erosion, and efforts are underway there to try and protect the land along the lake.

The Chicago Department of Emergency Management said the city is prepared for this winter weather.

Water department crews have been out clearing out catch basins to try and prevent flooding and will continue those efforts through the weekend.

IDOT reports they have plans in place for when the rain and snow start with 1800 trucks and other equipment statewide on standby to treat roads or respond to flooding situations.

The anticipated ice and snow is also likely to cause problems on the roads and at Chicago airports.

Airlines are encouraging people to change their travel plans to try and get them to where they are going going to avoid delays and cancellations.

Most airlines are waiving change fees for people, as long as the bought their tickets before Thursday and are traveling over the weekend.

Check with your airline on the rules to avoid change fees.

For the latest weather updates go to wgntv.com/weather

Storms moving south and east of the Chicago Metro area. All severe thunderstorm warnings have expired Delayed report of baseball-size hail in Evanston

Severe thunderstorm warning for portions of Lake and Porter counties in northwest Indiana continues in effect until 10:00 pm