CHICAGO – The franchise had been playing baseball since 1901 and there had only been one day like it before July 23, 2009.

A pitcher facing 27 batters and retiring them all in a row. In baseball, it’s called a perfect game, and only Charlie Robertson had come up with a such a performance before that day for the White Sox, doing so on April 30, 1922 against the Tigers.

But 10 years ago Tuesday, Mark Buerhle had it working against the Tampa Bay Rays, finding the right mix on the mound to retire all 27 batters he would face in a row at then US Cellular Field. It wasn’t that simple, of course, as he needed some help in the field and one incredible catch to keep it going.

After just a little over two hours of baseball, however, the pitcher had provided the franchise with one of the greatest moments in their history.

In front of 28, 036 fans on the South Side on a partly sunny 69-degree day, Buehrle took the mound for his 20th start in his 10th year with the White Sox. He was enjoying another All-Star season and was 10-3 on the day of the start for a White Sox team still in the fight for an American League Central division title they won the year before.

Up till that point, the White Sox had yet to have a perfect game. Buehrle had one no-hitter in his career up to that point, which he also pulled off at US Cellular Field against the Rangers on April 18, 2007. Oddly enough, he faced the minimum of 27 batters in the game, but he issued a walk to Sammy Sosa in the fifth that kept it from being perfect.

That wouldn’t happen on this day.

Buehrle was rolling with little complication for the majority of the afternoon with Ramon Castro catching him, picking up four of his six strikeouts in the first five innings of work. Josh Fields grand slam in the second inning gave him all the offense he would need on the afternoon and would end up being the first during a perfect game in MLB history.

From the fifth inning through the seventh, all but two outs came from grounders as the Tampa Bay offense had no answer for Buehrle. A strikeout of Carlos Pena opened the eighth inning and was followed by back-to-back plays from Gordon Beckham. Ben Zobrist popped up to the third baseman for the second out, and Pat Burrell’s liner got the third as Buerhle was one out from perfection.

“Call your sons, call your daughters. Call your friends, call your neighbors,” exclaimed play-by-play announcer Ken “Hawk” Harrelson after the last catch, and hopefully, they were there for one heckuva ninth inning.

The lasting image of the contest might have come in the first out of the inning, which looked like a sure homer off the bat of Gabe Kapler. It carried deep to left-center field, in front of the Billy Pierce tribute, where Dewayne Wise sprinted to in hopes of catching the ball. Inserted into center field for defensive purposes in the ninth as Scott Podsednik moved to left and Carlos Quentin exited the game, Wise leaped up over the wall to snag the ball and bring it back in play.

It would slip out of his glove going to the ground, but he corralled it with his other hand to complete the incredible out. 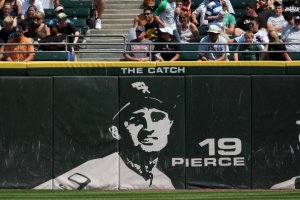 It’s one of the greatest defensive plays in the history of the franchise, and the phrase “The Catch” was added soon after and remains to this day. That out along with the strikeout of Michel Hernandez set up the moment of perfection.

“Alexei…….YES!!!!!!,” screamed Harrelson as Buehrle’s fourth pitch to Jason Bartlett was grounded to shortstop Alexei Ramirez, who threw over to fields at first to finish off the perfect game.

The joyous pitcher put his glove over his head in disbelief as his teammates mobbed him off the mound. 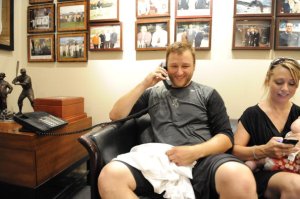 Buehrle would get a call from President Barack Obama following the victory and he earned the cover of Sports Illustrated for throwing the 18th perfect game in MLB history. 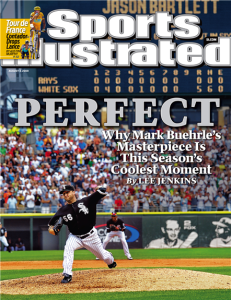 Ten years later, the effort still lives on in White Sox fan’s minds, even after the franchise got another perfect game from Philip Humber in 2012. The popular pitcher, who was a big part of the team’s 2005 World Series championship team, had his number retired in 2017 by the franchise.

On that day, one of the first things people remember about Buehrle is that perfect moment that happened ten years ago today. It was the perfect moment that White Sox fans waited a century to see, and one of their favorite pitchers delivered with an incredible effort and some help from his friends.

It's common decency that makes the phrase true in normal times, and that's especially the case during the COVID-19 pandemic.

MLB outlines a number of safety protocols for a return: Report

CHICAGO - Starting a season with 30 teams and hundreds of players in the middle of a pandemic is something Major League Baseball hasn't faced in a century.

Naturally, the number of safety protocols that would be in place for such a return would be sizable, and it appears that's the case per a report from The Athletic on Saturday.

TJ Maxx, Marshalls, Home Goods to reopen most stores by end of June