CHICAGO – It has a good look to it but on a warm summer night, it’s not always the best choice to wear.

Don’t forget that dark-colored jerseys tend to absorb heat. A black jersey will certainly do that, even during a game where the sun is only out for a couple of innings.

Even with temperatures in the 80’s on Monday the White Sox made that choice of jersey on Monday as they started a three-game series with the Tigers. For figurative reasons the jerseys fit perfectly for a team that in one month went from 13 games over .500 to a game under and in 4th in the AL Central.

Then they seemed to make perfect sense when James Shields was rocked for six earned runs and then the Tigers added another to make it 7-0. Yet it wouldn’t be for a few hours before having the darker jerseys would actually come in handy for a player.

A gutsy comeback helped the White Sox erase a seven-run deficit and tied the game in the ninth. The scoreless drought stretched into the 12th before Adam Eaton cracked a single to center that brought in J.B. Shuck for the tenth and final run of the night.

In traditional form the players rushed Eaton around 2nd base and piled on in celebration of the victory. Where it became unconventional is when a player decided to ditch the Gatorade bucket full of water and just bring out the sports drink in a one-gallon bottle.

Oh, and it was fruit punch. It could have made for an ugly sight with the white pinstriped jersey but luckily for Eaton, he was wearing the black jersey so no one knew any different. Still, it was a little uncomfortable, so right after the celebration he ditched the jersey and did an interview with the WGN-TV broadcast crew. 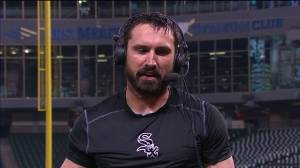 So what happened to the jersey? One might suppose it was sent off to be cleaned immediately because, even if you can’t see the Gatorade, you could certainly could feel it or smell it.

But after one of the best moments in a frustrating time for the team, Eaton made a gesture that would make the night even better. 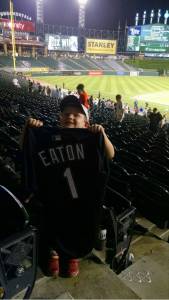 Eaton gave his jersey to Tommy Marren, a four-year old White Sox fan from Indianapolis. His father, Dave Marren, brought him down in the concourse behind home plate to watch the 12th inning.

Standing at the rail Eaton noticed Tommy, walked up to the rail and handed him the jersey. 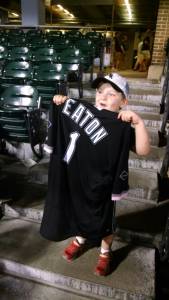 Here’s Tommy showing off his jersey that Eaton wore during his game-winning hit. You don’t see this happen a lot in baseball but it did on Monday night.

CHICAGO - Games haven't even started yet this season, but Major League baseball is already releasing next year's schedule.

The Cubs and White Sox will meet a half a dozen times in 2021, with the AL and NL Central squaring off interleague play. It's the first time in the last seven seasons the Crosstown Classic will go six games in back-to-back years. Both series are slated for August. Wrigley Field will host first three-game set the weekend of August 6th. Three weeks later the Cubs and Sox head to the South Side for three more to finish up the annual meeting.

CHICAGO - He's got a lot of great things to talk about with his now rebuilt White Sox team, even if he's trotting them out for only a 60-game regular season.

From his youngsters to the veterans, a solid core is in the final stages of development, and it's expected the White Sox will compete for a playoff spot in this unusual year. If they make it, they'll be October baseball on the south side for the first time in 12 years.

CHICAGO - White Sox fans won't be in the stands for the home opener in a few weeks, but they could still see their face at Guaranteed Rate Field.

The team announced its FANtastic Faces initiative Wednesday, allowing Sox diehards to buy cardboard cutouts of their likeness that will fill the seats during the first homestand July 24th to the 26th.