Baseball was still in the midst of a player’s strike that cost the league the 1994 postseason while the NHL was emerging from their own lockout that delayed its start three months. Illinois and Southern Illinois, the two schools representing the state in the NCAA Tournament, were eliminated in the first round.

In their second year without “His Airness,” the Bulls were hovering around the .500 mark all year, with the possibility of a low seed or even missing the NBA Playoffs entire looming.

It had been rumored about two weeks that it might happen. Veteran Chicago sports reporter Cheryl Raye-Stout broke that it would a few days before, but it wasn’t made official until a news release arrived via fax to outlets everywhere.

Michael Jordan was returning to the NBA after a hiatus that began on October 6, 1993, and started a unique part of the life of the superstar. He’d go onto play baseball professionally for the Chicago White Sox organization, taking part in spring training then suiting up for the Birmingham Barons.

The Bulls still won 55 games without him, but without Jordan’s help, they fell in the second round to the Knicks in seven games. Iconic Chicago Stadium had closed, much to the sadness of fans who adored the “Madhouse on Madison,” with the United Center opening a new and still yet uncertain era of Bulls’ basketball.

That was all about to change on this greatest of March sports weekends, which was 25-years ago this week. 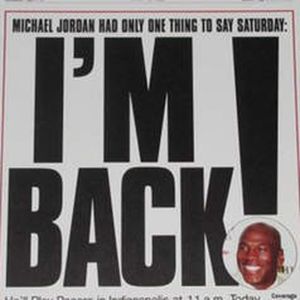 Following that iconic press release, the Chicago sports world had under 24 hours to wait for Jordan to return. The Saturday announcement would be followed by a Sunday afternoon game against the Indiana Pacers, a team looking to reach the top of the Eastern Conference.

“At the other guard, 6-6, from North Carolina, Number 45 Michael Jordan,” said Market Square Arena public address announcer Reb Porter as the guard was the last of the five Bulls’ starters to be announced.

While there were a number of boos from the very pro-Pacers crowd for the other members of the visiting team, Jordan was very much cheered by the fans when his name was called.

While he had a different number, 45, all just seemed right with the basketball world again. Chicago’s resident superstar was back.

Jordan, as one would expect, had a rusty return to the lineup, going 7-for-28 from the field in his first NBA game since June 20, 1993, scoring 19 points as the Bulls lost to the Pacers in overtime.

But he was a little better in his second game back in a return to a place where he really introduced himself to the NBA.

Three days later, in his final game in the Boston Garden, where he scored a playoff-record 63 points in Game 2 of the 1986 Eastern Conference Quarterfinals, Jordan showed some glimpses of his pre-retirement game. He was 9-of-17 from the field for 27 points in the Bulls’ first win since his return.

Then came his first game in Chicago, though it was a little different this time.

In the first great moment in the history of the new venue, which was televised on WGN-TV, the crowd reached a Chicago Stadium-level pitch when Ray Clay did his iconic introduction of Jordan before his first United Center game against the Magic

In keeping with is tradition, he walked by television play-by-play announcer Tom Dore and color commentator Johnny “Red” Kerr and clapped chalk in their faces. Despite the hoopla and Jordan’s 21 points, but the Bulls would lose to the Eastern Conference front-running Magic 106-99.

On the next night, Jordan had another first since his return: A game-winner. In the closing seconds against the Hawks at The Omni, Jordan knocked down a jumper as time expired to beat Atlanta in a 99-98 victory.

Three days later, Jordan showed he was back to his old self already, going into Madison Square Garden and scoring 55 points in a victory over a Knicks’ team that knocked the Bulls out of the playoffs the year before.

That was part of a six-game winning streak for the Bulls as they’d finish the regular season 13-3 with Jordan in the lineup. Just three games over .500 when he joined, the Bulls would finish with a 47-35 record, good enough for a fifth-seed in the Eastern Conference playoffs.

After a four-game first round victory against the Hornets, the Bulls and Jordan faced the Magic, a young, talented team poised for a big run. In Game 1 in Orlando, Jordan had the ball stripped away by Nick Anderson in closing seconds of a 94-91 loss, and it was then he decided to make a change.

Lacking a big rebounder inside, the Bulls weren’t able to keep the momentum up after that. Orlando would go onto win the series in six games, with former Bulls forward Horace Grant getting put onto shoulders after the clinching Game 6 win at the United Center.

Of course, the disappointment would only be a footnote to another run for the dynasty.

Jordan and the Bulls wouldn’t lose another playoff series for three years as they took home a trio of championships before Jordan retired again in January, 1999 following a league lockout.

All of that success started with a simple press release, a return game at the now-demolished Market Square Arena, and two months where Chicago welcomed its greatest star back home.

MLB and MLBPA approve guidelines for a return to play when safe: Report

NEW YORK - It still is a question of when and not if, though it seems as if the return of Major League Baseball won't be happening anytime in the coming weeks.

With the CDC's recommendation of eight weeks without gatherings of 50 or more back in March, mid-May would seem the earliest teams might be able to get a modified spring training going. Games, with or without fans, wouldn't follow for a few weeks after that.

CHICAGO - One by one, prominent athletes from around the country are making donations to organizations in their communities during the COVID-19 pandemic.

This week, it was the Blackhawks' captain who joined that group of those helping out organizations in Chicago.

488 new cases of COVID-19 in Illinois, including 8 deaths; total cases now over 3K