The “Shawon-O-Meter” became a fixture at games starting in 1989 as it honored Cubs shortstop Shawon Dunston. The sign was seen a Wrigley Field for a number of years and even made it’s way to the 1989 National League Championship Series at San Francisco’s Candlestick Park.

David Cihla of Chicago created that sign two decades ago and now he’s back again as the Cubs play in their first World Series in 71 years. This time his meter pays tribute to another Cubs’ fan favorite. 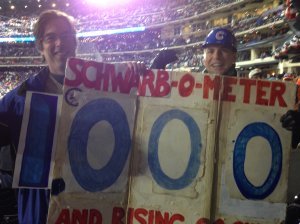 The “Schwarb-O-Meter” was created by Cihla last year for the NLCS against the Mets. He brought the sign with him o Citi Field for the first two games and then back to Wrigley Field for the last two contests of the season.

Dave said he chose Schwarber, in part, because he wears the same No. 12 as Dunston did during his time with the Cubs. The outfielder’s popularity among the fans and towering homers during the 2015 playoffs also made it an easy choice.

The sign shows slugging percentage of Schwarber instead of the batting average as it did with Dunston 20 years earlier. Like then Cihla and the person he is with at the game use a calculator to update the total throughout the game. Some paper and markers make the numbers while some scotch tape affixes them to the sign which is held up in the stands. 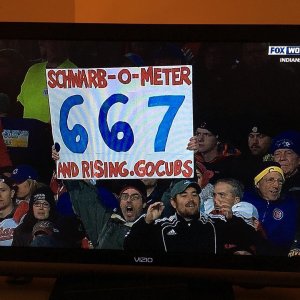 After Schwarber’s surprise return to the lineup after missing most of the year with a torn ACL and MCL suffered in April, the meter showed up in the stands at Progressive Field. Cihla along with his friend Mike Pordes of Columbia, South Carolina brought the sign to both Game 1 and 2 in Cleveland as Schwarber was the designated hitter for the contests.

The sign got to do a lot of updating after Schwarber collected three hits, two RBI’s and a pair of walks as the Cubs split the first two games of the World Series against the Indians. 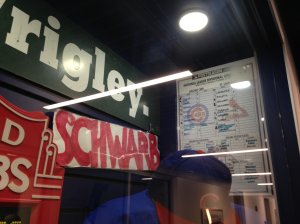 This is a brand new meter from the one used in New York since part of that one now sits in a display case in the newly remodeled Cubs’ clubhouse along with the original “Shawn-O-Meter.”

Will this new meter make an appearance at Wrigley Field this weekend as the World Series returns for the first time since 1945?

Like many others, Cihla is looking for the elusive and expensive tickets in hopes the “Schwarb-O-Meter” will be there when Kyle steps up to the plate.

PITTSBURGH - In his debut, things were just as fans might have expected from their newest starting pitcher. Saturday was the exact opposite, even if the opponent was the same.

For Zach Davies looked nothing like he did six days earlier in his start in a Cubs' win over the Pirates at Wrigley Field. This time, he didn't even make it out of the second inning in one of the worst performances of his major league career.

COLUMBUS - Who cares if it was just four minutes into the game? Jeremy Colliton sure didn't.

After watching his Blackhawks' team surrender two goals in the opening moments of their game with the Blue Jackets at Nationwide Arena, the head coach used a very early timeout.

PITTSBURGH - Last season they were an exception to the rule around Major League Baseball as they didn't have a single COVID-19 case during the regular season.

But this year, the Cubs have had to deal with a case of the virus very early in their season with the coaching staff.

Mother arrested after 3 children, all under 5 years old, found slain in Los Angeles