It was 50 years ago that Mario Andretti, legendary driver of multiple machines in his storied career, came home with his first and only victory at the Indianapolis 500. 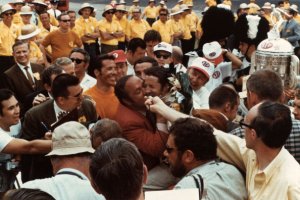 The red STP machine came home with the win, giving hard luck owner Andy Granatelli his first triumph in the race. His kiss of the driver in victory lane is one of the most iconic in the history of the race.

That was 1969, and in 2019, that victory is the most celebrated moment this May at the Indianapolis Motor Speedway. That’s saying something, considering the accomplishments of drivers from the past make up the fabric of the now century-old event.

All of the tributes have happened around the Andretti still competing in the race – Mario’s grandson Marco. This Sunday will be his 14th start in the “Greatest Spectacle in Racing,” and he’s spent this month watching the many tributes to his grandfather’s greatest moment in Indianapolis.

“I think it’s so cool, it’s absolutely well deserved on his part, of course,” said Marco of the tributes to his grandfather over the past month. “We’ll try to do our best to honor him.”

Of course, that would be to come home with the victory in the 500 mile race – which no member of the family has done since Mario’s triumph in 1969.

That’s where the supposed “curse” comes.

Mechanical troubles often denied Mario his shot to take home multiple wins at the Indy 500. They happened so often, one of the phrases that late track announcer Tom Carnegie is known for is “Mario is slowing down.”

His son and Marco’s father, Michael, had his fair share of heartbreak through the years. In 1991, he had the lead with under ten laps to go but was passed by Rick Mears, who won his fourth 500. The next year, a dominant Andretti led 160 laps and was cruising to victory when his fuel pump died 11 laps from the finish.

Then in 2006, a consistent Michael found himself in the lead with five laps to go until rookie Marco passed him for the lead. He’d maintain that lead all the way up until the last lap and appeared to have the win, but Penske Racing driver Sam Hornish Jr. made a bold late charge.

He caught Marco on the front stretch and passed him on the inside in the final 100 yards to steal the victory from Andretti by a car length.

Since then, Marco has been consistent in the race and has had a few close calls. In 2008, he finished third and then did so again in 2014, competing with Helio Castroneves and eventual winner Ryan Hunter-Reay till the end.

He’s got five Top 5 finishes and 8 in the Top 10, and he’ll start 10th on Sunday as he once again races with his father Michael for Andretti Autosport. He’ll have to do some climbing to come out on top and provide the ultimate tribute to his grandfather.

“A little bit,” said Andretti when asked if he’d thought about what it would be like to win his first Indy 500 on the 50th of his grandfather’s victory. “You can picture it a little bit, but you can’t get too ahead of yourself. You need to really need to stay focused on the task at hand and try to execute.”

Should Andretti do that well enough, the family can have another anniversary to celebrate in the future.

Jose Quintana agrees to a one-year deal with the Angels: Report

CHICAGO - The Cubs' rotation for the upcoming 2021 season got a little thinner late Tuesday night when another member decided to go elsewhere.

This time, it's a reunion between Jose Quintana and his former manager in Chicago.

Blackhawks get First Point, but fall in OT

Kevin Lankinen gets his shot in net as the Blackhawks continue their search for a No. 1 goalie

SUNRISE, Fla. - Perhaps the No. 1 question when it came to the Blackhawks when the season started was who was going to take the position of No. 50.

With Corey Crawford out and no clear cut successor, the team entered training camp with four players that figured to compete for the position. When the final roster was announced, that number went down to three, as Malcolm Subban, Collin Delia, and Kevin Lankinen all figured into the mix to start.

On Day One, Biden to undo Trump policies on climate, virus