CHAMPAIGN – On March 8, it looked like it was just the start of a special March nearly a decade in the making.

Looking to clinch a first-round bye for the Big Ten Tournament, Illinois took to the court against Iowa for a memorable 40 minutes of basketball. Momentum swung both ways over the course of 40 minutes, but unlike February, the Illini got the upper hand this time.

Kofi Cockburn blocked the Hawkeyes’ Luka Garza in the final seconds of the game to preserve the 78-76 win. It sent the sold out State Farm Center into a frenzy as Illinois finished a transformative season at 21-10.

For the first time since 2013, Illinois was headed to the NCAA Tournament, with some picking Brad Underwood’s team as a potential surprise team in the 68-team field.

Then the pandemic happened.

The NBA suspended their season, other pro leagues did the same, and the NCAA Tournament was canceled completely just four days later.

What Illinois might have done in the tournament is now left up to the imagination. Would they have put together a run to the Sweet 16 or the Final Four for the first time in 15 years?

Who knows. But there is a men’s basketball team in Illinois history that knew what they went through 77 years earlier. 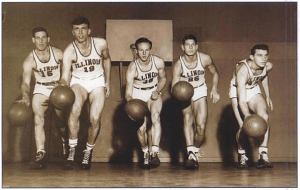 Before there was the “Flying Illini” or Dee, Deron, Luther, Roger, and James, there was a group called the “Whiz Kids” that were the rage in college basketball.

Andy Phillip, Gene Vance, Ken Menke, Art Mathisen and Jack Smiley were all part of an Illinois juggernaut under then head coach Doug Mills. The stormed through the season with a 17-1 record and had victories in all 12 Big Ten games to capture the conference title.

They won all but one of those contests against Big Ten foes by double digits and beat six teams by 20-or-more points. In what would be their final game of the year, the Illini beat Chicago, then a conference foe, 92-25.

So why was it their last game of the year? Because three of their starters – Menke, Mathisen, and Smiley – were drafted into the Army as part of the World War II effort.

Even with Phillip and Vance still with on the team, Illinois chose not to take part in the tournament with their starters gone. Only eight teams were chosen for the NCAA Tournament back then, which would have included Illinois, and the Illini could have also gone to the NIT, which was considered an even bigger tournament at the time.

But the war effort took precedent, though the team did get one honor as they were named the Premo-Porretta Power Poll National Champions. That was the ranking system used before tournament play and the Associated Press poll.

While the “Whiz Kids” never made the Final Four, their successors did over the next few years.

Under new head coach Harry Combes, who took over for Mills after the 1946-1947 season, Illinois made the Final Four in 1949, 1951, and 1952. Unfortunately, that team lost each year in the National Semifinals, as the Illini failed to reach a National Championship game until 2005.

Maybe success will be a part of the Illini’s story in the coming years after such a promising season was lost before the ending.

But at least they know, in terms of program history, they’re not alone in the plight.

CHICAGO - For the first time in nearly two decades, DePaul will be looking for new leadership in their athletic department.

Director Jean Lenti Ponsetto announced on Friday that she intends to retire from her position in the coming months, ending an 18-year run as the head of Blue Demon athletics.

A person with knowledge of the situation says the NBA’s Board of Governors has approved a 22-team format for restarting the league season in late July at the Disney campus near Orlando, Florida.

The format calls for each team playing eight games to determine playoff seeding plus the possible utilization of a play-in tournament for the final spot in the Eastern Conference and Western Conference postseason fields, said the person who spoke to The Associated Press on condition of anonymity Thursday because the league had not yet revealed the vote result publicly.

CHICAGO - Matt Nagy put football on the back burner Monday as protests over George Floyd's death continued across the country.

"Football is secondary. We need to get life right."