CHICAGO – The first team to make the Final Four from the State of Illinois came thanks to a school coached by a first-year leader.

Ray Meyer got DePaul to the 1943 Final Four when the tournament was just eight teams big. George Mikan helped the coach’s first Blue Demons team to the national semifinal at Madison Square Garden.

They lost to Georgetown that day, and while they did win the 1945 NIT, they’d have to wait a while for their shot to return to the Final Four.

Some 46 years later, it finally happened for a second time. 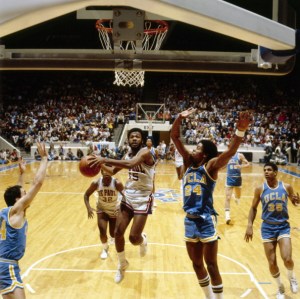 DePaul got momentum late in the 1970s and reached the Elite Eight in 1978, their farthest advancement in the tournament since 1943. They lost to Notre Dame as the Irish clinched their last Final Four berth, but the Blue Demons didn’t let it stop their momentum.

Led by Chicago-native Mark Aguirre and Gary Garland, both future NBA players, the Blue Demons continued to improve as the regular season went along. From February through early March, DePaul won eight-straight games, with the last two coming against No. 9 Marquette and No. 2 Notre Dame.

Both those wins came at Alumni Hall, and despite an upset by Loyola in the season finale, the Blue Demons’ momentum wasn’t going to stop.

A No. 2 seed in the West Region, DePaul beat USC at Pauly Pavilion to advance to the Sweet 16 in Provo, Utah. There are Marriott Center, DePaul beat Marquette 62-56 to get to the Regional Final against top-seed UCLA.

Having lost to the Bruins by 23 points in the season opener in Los Angeles, DePaul delievered one of their best games of the season. Garland and Curtis Watkins each had 24 points and Aguirre 20 as a big first half lead held up for a 95-91 victory and a regional title.

It was the first Chicago team to make the Final Four since Loyola won the championship back in 1963.

DePaul would go right back to Utah and Salt Lake City for the Final Four, where they would face Larry Bird’s undefeated Indiana State team.

It was back-and-forth for 40 minutes, and down by one, DePaul had the ball with the shot to win it. The Blue Demons wound down the clock and Aguirre had the shot on the hoop but it was no good. The Sycamores would split a pair of free throws at the other end, and with one second left, DePaul got one last full court pass to attempt to get a game-tying hoop.

But Garland’s long pass bounced off the backboard on the other end, as Indiana State ended the Blue Demons championship hopes with a 76-74 win. Bird was 16-of-19 from the floor for 35 points along with 16 rebounds.

In that era, however, the Blue Demons weren’t done in Salt Lake City. They’d take part in the third place game against Penn, who lost to Magic Johnson and eventual champion Michigan State in the semifinal.

DePaul would win that game 96-93 in overtime in what was their last game played on a Final Four weekend so far.

Meyer’s DePaul teams were one of the best in all of college basketball over the next few years. They were ranked in the top five most of the next three seasons, but each time lost their first game in the tournament. The Blue Demons made the Sweet 16 three times in the 1980s, but never to the Final Four.

CHICAGO - For the first time in nearly two decades, DePaul will be looking for new leadership in their athletic department.

Director Jean Lenti Ponsetto announced on Friday that she intends to retire from her position in the coming months, ending an 18-year run as the head of Blue Demon athletics.

A person with knowledge of the situation says the NBA’s Board of Governors has approved a 22-team format for restarting the league season in late July at the Disney campus near Orlando, Florida.

The format calls for each team playing eight games to determine playoff seeding plus the possible utilization of a play-in tournament for the final spot in the Eastern Conference and Western Conference postseason fields, said the person who spoke to The Associated Press on condition of anonymity Thursday because the league had not yet revealed the vote result publicly.

CHICAGO - Matt Nagy put football on the back burner Monday as protests over George Floyd's death continued across the country.

"Football is secondary. We need to get life right."