CHICAGO – In an already difficult time for everyone, the Ramblers spent the end of March mourning the loss of one of their greatest players.

Les Hunter passed away at the age of 77 on March 27th, and gone was one of the best players in Loyola basketball history from easily their finest era. He was a versatile forward/center for a team that made the postseason three straight years in the early 1960s, and Hunter’s No. 41 is retired by the school.

Drafted originally by the Detroit Pistons of the NBA, the center would go on to find success in the ABA, twice being named an All-Star in the league.

Yet Hunter’s greatest accomplishment may very well have been during the 1962-1963 season. That’s when his efforts along with those of his teammates and head coach provided the State of Illinois’ its greatest college basketball moments in more ways than one. 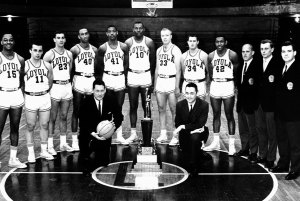 In the fall of 1962, longtime head coach George Ireland’s team was coming off a run to the NIT Final Four the previous winter. He had Hunter along with other standout players like Jerry Harkness, Vic Rouse, John Egan, and Ron Miller to make up an experienced lineup.

Those five would carry the majority of the load the entire campaign, which Loyola began ranked fourth in the country and finished 24-2, and a spot in the 25-team NCAA Tournament.

Another significant trend set by the team was their willingness to break college basketball’s unspoken rule that only two African-Americans would play on the court at a single time. Ireland routinely had four black starters throughout the entire season, and against Wyoming on December 29th, the Ramblers started five African-American players

That was the first time in Division-I basketball history that it happened. It would also set up one of the most important contests in college hoops history later in 1963.

After crushing Tennessee Tech 111-42 in the opening round at McGaw Hall at Northwestern – which is still the most lopsided victory in tournament history – Loyola headed to East Lansing, Michigan to face Mississippi State.

Labled the “Game of Change,” the Ramblers, who featured four African-American starters, faced a Bulldogs team that defied a state law that prevented schools from playing a team with black players.

In fact, the Bulldogs had to sneak out of the state at night to prevent avoid being served an injunction that would have kept them from traveling to Michigan for the game. 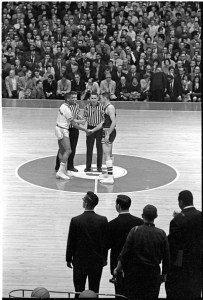 Players shook hands at midcourt and the Mideast Region semifinal went on at Jenison Fieldhouse, with the Ramblers winning it 61-51 to advance to the Elite Eight. They’d face in-state rival Illinois in that contest in East Lansing and defeated the Illini handily 79-64 to advance to the Final Four for the first time in school history.

In their first national semifinal game at Freedom Hall in Louisville, Hunter enjoyed one of his best games of the season, scoring 29 points and grabbing 18 rebounds in beating Duke 94-75. That set up a meeting with the two-time defending national champion Cincinnati Bearcats in the final .

What would take place over that 45 minutes on March 23, 1963 would be the stuff of “March Madness” legend, as the teams would put on a competitive show. Down by eight at the half, Loyola would fight back and tie the game on a Harkness jumper with 12 seconds to go to force overtime.

In a slow-paced extra session, it was Rouse that came up with the biggest basket in Loyola history. With the game tied at 58 in the final ten seconds, Hunter took a shot from just outside the paint that was no good, but Vic was there to tip it in with one second left.

Cincinnati wasn’t able to get the ball inbounds before the clock expired, giving the Ramblers a 60-58 win and their first National Championship. Remarkably, Loyola never made one substitution in the game, with Egan, Harkness, Hunter, Miller, and Rouse playing all 45 minutes. 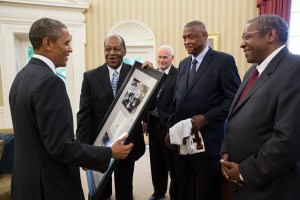 Fifty-seven years later, it remains the only Division-1 men’s basketball championship won by the State of Illinois. That Ramblers’ team is remembered for that but also for their actions in integrating college basketball.

On the 50th anniversary of the win in 2013, the surviving members of that Loyola team were honored at the White House by President Barack Obama and later that year were all inducted in the College Basketball Hall of Fame in Kansas City.

It’s all deserving for the team, including the late Hunter, who are always brought up when people are remembering their “Memories of Madness” from years past.

ATLANTA - It may not have been how the event normally goes, but the moment was still a special one for the Bulls' best player.

Four years after tearing his ACL and after a few seasons of building himself into the Bulls' top player, Zach LaVine was made his first appearance in an All-Star Game on Sunday at State Farm Arena in Atlanta. A reserve for Team Durant, the guard became the first member of the Bulls to make the game since Jimmy Butler in 2017.

CHICAGO — Mayor Lori Lightfoot announced Monday fans will be allowed in Chicago ballparks up to 20 percent capacity for Opening Day.

Lightfoot's announcement comes after a further easing of COVID-19 restrictions due to sustained progress in reopening metrics., with indoor bars and restaurants opening at 50 percent capacity.

Up by three goals, the Blackhawks got a tough lesson from the Lightning

CHICAGO - For about 22 minutes, it looked as if Sunday afternoon was going to be the moment which the new-look Blackhawks would introduce themselves the hockey world.

Two goals in the first period and another early in the third by Pius Suter put the hosts up 3-0 against the reigning Stanley Cup champion Lightning at the United Center. Two rookies - Philipp Kurashev & Pius Suter - scored goals around one from Mattias Janmark, as it looked like the Blackhawks were in position to get their biggest win of the season.

Allergies or COVID-19? How to tell the difference

‘You don’t look that sick to me’: Vaccine rollout breeds mixed emotions

Nearly 100 pet dogs and cats have contracted COVID-19. Here’s how to protect your pets