CHICAGO – For many parents around the country, spending quality time with children has just increased quite a bit.

With many schools closed, many mothers and fathers have taken on the role of watching their kids full time while working from home. Others are helping to educate their children at home as well to make sure they’re still learning during the time away from home.

Chicago Fire FC defender Johan Kappelhof is one of those doing so in a creative way during Chicago’s “Shelter-in-Place” order.

In a video tweeted out on the Chicago Fire FC’s Twitter account, Kappelhof is playing the “ABCs” on a guitar near the windowsill with his children joining him for the song.

He, like the rest of the club, are trying to pass the time during the Major League Soccer season suspension due to the COVID-19 pandemic. The league’s moratorium, as of now, runs through April 3rd. 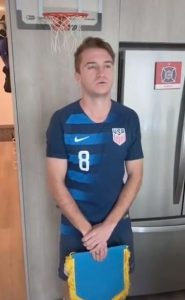 Meanwhile, his teammate, Djordje Mihailovic, is creating quite a following for himself while isolated at his home.

He’s created a TikTok account that has nearly 8,000 followers as of Tuesday night.

One of the videos already has one million views, as Mihailovic has done everything from aiming a small soccer ball through a foam roller to a pretending to be lining up for a game.

Either way, he’s finding a way to keep himself occupied pretty well while unable to train.

White Sox shut down by Indians

CHICAGO (AP) — Zach Plesac tossed six strong innings and the Cleveland Indians snapped a scoring drought with a six-run fourth in a 7-1 victory over the Chicago White Sox on Saturday.

The Indians had been blanked for 13 innings before Franmil Reyes and Jordan Luplow each hit a two-run homer in the fourth. Luplow was 0 for 21 with a walk this season before homering.

CLEVELAND - One of the great questions in all of sports is how governing bodies were going to handle fall sports with the COVID-19 pandemic continuing across the United States.

On Saturday, the Mid-American Conference, which includes Northern Illinois University, made their move when it comes to the next few months for their sports.

CHICAGO - March 21st was supposed to be the start of a new era for Chicago's Major League Soccer franchise as they returned to their original home with new branding and identity.

The COVID-19 pandemic changed those plans, suspending the season and delaying their much awaited return to Soldier Field.