CHICAGO – They’ve been playing baseball at the Friendly Confines since 1914 with each contest featuring its own unique narrative.

Some are significant, others are not. The Cubs play in the chill of April, the heat of July, the brisk weather of September, or the drama of October. Each of these games takes on their own personality, special to just one or the masses.

But a few stand out among the rest.

It wasn’t a game in which the Cubs clinched anything. In fact, they didn’t even win, suffering one of their 82 losses on the season. But what transpired over four hours and three minutes that afternoon in front of 14,952 fans remains something legendary on its 40th anniversary this Friday.

Phillies 23, Cubs 22. The score itself speaks to the epic nature of this contest on a sun-splashed day at the Friendly Confines.

One of the biggest events of the day was the honoring of the 1978-1979 DePaul basketball team, who two months earlier had qualified for the NCAA Final Four. Head coach Ray Meyer and his team participated in a pre-game ceremony before the fireworks started.

Over the next 10 innings, the teams would combine for 50 hits and 45 runs as the swirling winds created insanity over the course of this most unusual ballgame

The Phillies scored seven runs in the first inning, The Cubs struck for six in the bottom half. Philadelphia responded with an eight-run third and a two-run fourth to go up 17-6. When the home team got three back in the fourth, the Phillies got four more to go up 21-9.

It was reminiscent of a Bears game that might have been played earlier in the decade when the NFL team still called Wrigley Field home. But this was a baseball game, and incredibly, it wasn’t over.

Dave Kingman’s towering homer in the sixth inning was the symbol of an incredible Cubs’ comeback over the next five innings. It was one of three that Kingman would hit on the day, and it sailed over Waveland Avenue and smacked the porch of the third house down Kenmore Avenue.

The blast is considered one of the longest homers ever hit at Wrigley Field and was part of a 13-1 run by the Cubs to get back in the game. When Barry Foote’s single to left field brought home Steve Ontiveros in the 8th inning, the home team miraculously tied the game at 22.

Somehow the team’s went scoreless in the 9th, forcing extra innings. There is was Mike Schmidt’s second homer of the ballgame that gave the Phillies a one-run lead. The Cubs went 1-2-3 in the bottom half of the inning, and when Ontiveros grounded out to third base, the game was over. 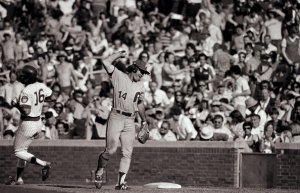 Pete Rose rose his arm in joy as the incredible game finally ended but the legend would continue long after that put out. 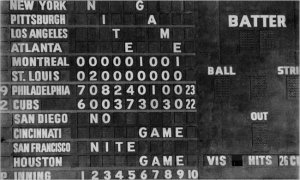 The scoreboard itself was a marvel, showing the incredible offense and change of momentum over the course of ten innings. Just as staggering were some of the efforts by the individual batters.

The Cubs won the home run battle 6-5, but the Phillies ended up with more total extra-base hits (13-10). Only two of the 11 pitchers that took the mound for that game were able to get out without allowing a run. 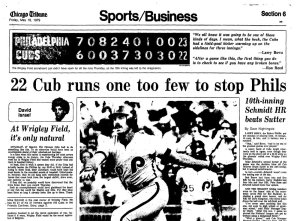 It’s performances like that which have helped this game remain a memorable one in the long history of baseball at Wrigley Field. There are others that have passed it in significance, but none were quite as wacky as that day 40 years ago on Friday.

LAS VEGAS - When baseball may return in 2020 remains a major question, as baseball owners and players continue negotiations over a proposed half-season of play.

While that goes on, some players are still trying to stay in shape at home while spending time with family.