Those who watched the final season of the Bulls’ dynasty, or are curious to learn more about it, have been flocking to ESPN for the 10-part documentary “The Last Dance” over the past few weeks. Now, fans will get a chance to remember or discover what happened in the city with one baseball player in the summer and fall of 1998.

Directed by AJ Schnack, the film will be premiere on Sunday, June 14 at 8 p.m. CST.

Just four years after the MLB endured a painful strike that ended the 1994 season without playoffs or World Series, McGwire and Sosa’s chase for the record brought positive attention back on the sport. The Cardinals’ first baseman was thought to have a chance at the record at the beginning of the season, but Sosa emerged as a contender thanks to 20 homers in June.

McGwire would pass Maris with his 62nd homer against the Cubs on Sept. 8 with a line drive homer off Steve Trachsel. Yet Sosa would have an answer less than a week later.

On Sept. 13, Sosa would hit a pair of homers against the Milwaukee Brewers to pass Maris and tie McGwire at the top of the home run chart.

It would be a back-and-forth race till the end of the season, but it was McGwire (70 homers) that would best Sosa (66) in the historic chase. Meanwhile, Sosa, who hit .308 with an MLB-high 158 RBI, won the National League MVP award and helped the Cubs to a Wild Card playoff berth. 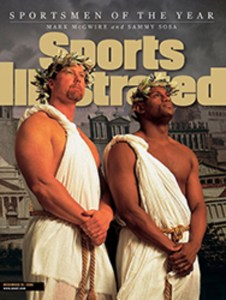 The entire summer breathed new life into baseball in the post-strike era, with McGwire and Sosa each being named Sports Illustrated’s Man of the Year.

In the coming years, however, the rampant use of steroids and performance enhancers tarnished the chase. In 2010, McGwire came forward and admitted using steroids during that 1998 record-breaking season.

Suspicion surrounded Sosa as well, and in 2009, The New York Times reported that he indeed tested positive for steroids in 2003, but there has never been definitive proof or an admission.

All of this figures to be part of a very complicated documentary on a memorable baseball moment in 1998 that history has viewed in a number of different ways.

Cheeses recalled nationwide due to listeria

4-year-old shot while riding inside vehicle in West …

Evanston teen born with his intestines outside of …

Cheeses recalled nationwide due to listeria

18yo accused in deadly Joliet shooting found in GA

CPD: 4yo shot in the head on SW Side