CHICAGO – In the grand scheme of clinching a playoff spot, it’s the least desirable scenario.

But the Cubs really didn’t seem to mind a year ago.

The music was blasting and the lights flashing in the clubhouse as the specialty shirts and hats were handed out. Champagne and beer were flying through the air then onto each other’s heads in a jubilant celebration.

Eventually it spilled out onto Wrigley Field where the Cubs celebrated clinching their first playoff berth since 2008 on September 26 of last year.

So what if they had lost to the Pirates that day 4-0 and the spot in the postseason was actually clinched by a Giants loss to the Athletics late the night before. This Cubs team was excited to be in the Friendly Confines and they were ready to party.

A similar scenario presents itself to Joe Maddon’s team this weekend as the Cubs’ Magic Number to clinch the National League Central Division title has dwindled to one. Whatever happens first-a win by the Cubs over the Brewers or a Cardinals loss-give the Cubs their first division crown in eight seasons.

It also keeps a recent trend going for the team: Celebrating a postseason berth in front of the home fans. 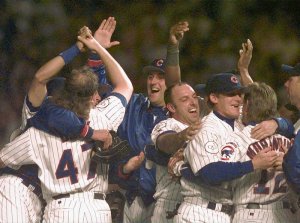 Since 1998 the Cubs have clinched a postseason berth five times and all but one of those was celebrated at home. The first was in 1998 when the team won a one-game Wild Card playoff game at Wrigley Field 5-3 over the Giants. That was the first postseason berth clinched at home since division play began in 1969 since the Cubs’ 1984 and 1989 division-winning victories happened in Pittsburgh and Montreal, respectively. 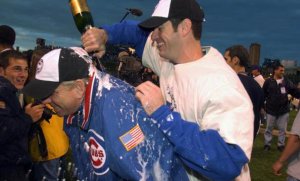 Five years later the Cubs locked up their first division title in 14 years in a most unusual way against the Pirates. A previous postponement meant a Cubs doubleheader on the second-to-last day of the season on September 27, 2003. Mark Prior was strong in Game 1 as the Cubs won 4-2 to lower their Magic Number to 1.

In Game 2 Sammy Sosa belted his 40th homer and Matt Clement pitched the Cubs to a 7-2 victory and a division championship. It was the first celebration in a memorable October for the Cubs who won their first playoff series in 95 years over the Braves but blew a 3-1 lead to the Marlins in the NLCS. 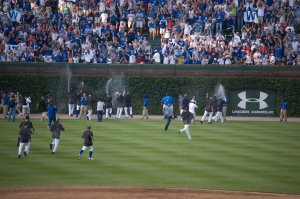 After winning the 2007 NL Central Division title in Cincinnati on the final weekend of the season the clinching party returned to Wrigley Field the next season. The September 20th 5-4 victory over the Cardinals that locked up a playoff berth stands as the earliest the team has clinched a postseason berth in the division era.

Players stayed on the field for a longtime after the game and even sprayed champagne on fans in the bleachers as they waved a number of “W” flags in support of their division champions. It was also the first time the Cubs appeared in the playoff in consecutive seasons since making the World Series from 1906-1908. 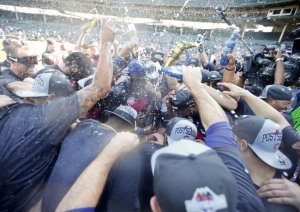 Last year’s celebration was more unusual than the rest since it came about 15 hours after officially clinching the berth and then a pair of losses against the Pirates. But the celebration wasn’t tempered much by the enthusiastic bunch.

Thursday at 7:05 PM gives the Cubs a chance to lock up the division by their own doing and set off another celebration Wrigley Field has come to know and enjoy.

Tim Anderson & Jon Lester give back ahead of Thanksgiving

CHICAGO - They've been involved in the community at other times in this trying year of 2020, and ahead of the Thanksgiving holiday, Tim Anderson and Jon Lester are giving back once again.

The White Sox shortstop, as part of his work with his "League of Leaders" foundation, handed out 205 turkeys to residents in his homestate of Alabama this week ahead of the Thanksgiving holiday.

CHICAGO - It was considered a formality after he was given the job six days ago after Theo Epstein stepped down.

On Monday, the Cubs officially locked down Jed Hoyer to be their next President of Baseball Operations for the near future.

The Cubs say goodbye to Theo Epstein on Friday

CHICAGO - All of the attention and hoopla over the surprising announcement came on Tuesday, so for many, that's when his era ended with the franchise.

But as stated in the initial news release by the Cubs, Theo Epstein was still on duty officially for the team until this Friday, when he would depart the organization after three years.

One person killed in South Side stabbing