CHICAGO — Before Friday’s game against San Diego, 9-year-old Matteo Lambert of Vienna, Virginia, met Anthony Rizzo in the Chicago Cubs’ dugout and gave him a note asking for a “moonshot” on behalf of group running a 5K in Grant Park this weekend to raise money for kids with cancer.

Rizzo followed with a go-ahead grand slam, his first home run since June 15. 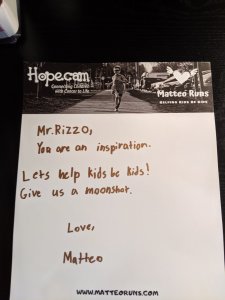 “That was for him,” Rizzo, a Hodgkin’s lymphoma survivor, said after the Cubs overcame a three-run deficit to beat the Padres 6-5. “That’s really special for him to come and hang out there.”

Matteo is running 32 races for kids with cancer, and he came to Chicago from the D.C. area to do his 20th race on July 20th – the 50th anniversary of the “moonshot” by Apollo 11 landing on 3 American astronauts on the moon.  The 5K was canceled for Saturday due to heat.  But, inspired but Rizzo’s grand slam and history of not giving up to beat cancer – Matteo postponed his return to D.C. 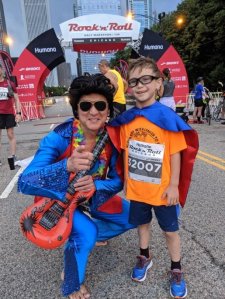 Sunday morning he doubled down and ran his first 10K for kids with cancer at Grant Park in the Rock-N-Roll series for St. Jude’s. He finished with a time of 52:10, good for 121st overall out of 4,125 racers.

His dad says he’s going to send Rizzo a medal engraved with his name and Matteo’s time.

You can donate to Matteo’s cause here.

Sunday Forecast: AM snow tapers off to partly sunny skies. N winds 10-20 mph, gusts at 30 mph.Winter Weather Advisory continues until noon for much of Chicagoland, until 5 p.m. for NW Indiana. High 22.

On a field littered with snow flurries, Gould made a 45-yard field goal Saturday night as time expired and the San Francisco 49ers knocked off the top-seeded Packers 13-10 and possibly ended Aaron Rodgers’ tenure in Green Bay.

Are night sweats an omicron symptom?