CHICAGO – The only highlights that fans of Major League Baseball have to watch at the moment come from the past thanks to the COVID-19 pandemic.

So over the past six weeks, television networks along with rooters themselves have gone into the archives or YouTube to relive some of the favorite contests

The good news for Cubs’ fans is that Wednesday represents the anniversary of one of the greatest games ever pitched in franchise history.

On a mostly grey, average spring day early in the season, the rookie pitcher delivered a gem against the Astros in front of 15,758 lucky fans that were at Wrigley Field that afternoon.

Over the course of nine innings, Wood tied a major league record by striking out Houston 20 batters, becoming the first Cubs’ player to accomplish the feat. It’s only happened five times in a nine-inning game in history, with four different pitchers accomplishing the feat – Wood, Roger Clemens (2), Randy Johnson, and Max Scherzer.

The feat took place in Wood’s fifth major league game, having made his debut on April 12th of that year in Montreal.

He struck out the first eight batters he face then fanned eight of the last nine Astros, including Derek Bell on his 122nd pitch to finish off the masterpiece.

“Here comes the hook!” exclaimed WGN play-by-play announcer Chip Carey before the pitch, and after it produced a swinging strikeout, teammates mobbed Wood on the mound.

What made the appearance so impressive was his incredible control on the afternoon. He didn’t walk a batter the entire afternoon, hitting just one and allowing just one hit, which was a bit controversial.

Leading off the third inning, Ricky Gutierrez hit a grounder towards third base and it went off the top of the glove of Kevin Orie, then rolled into left field. It could have been ruled an error, but Gutierrez was awarded the base hit, and in the end, would deny Wood at no-hitter as well. 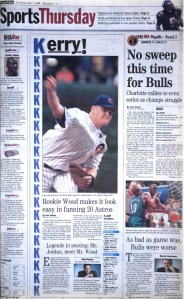 Yet that wasn’t about to take away from the glory of an incredible afternoon for Wood – one that’s worth remembering at a time where the past is all MLB fans have.

LAS VEGAS - When baseball may return in 2020 remains a major question, as baseball owners and players continue negotiations over a proposed half-season of play.

While that goes on, some players are still trying to stay in shape at home while spending time with family.

Protests flare again in US amid calls to end police violence

Protests flare again in US amid calls to end police violence