CHICAGO – There have been three numbers that he’s worn his entire career – and the first one is too obvious.

The No. 23 is synonymous with the legendary Michael Jordan, and now sits in the rafters of the United Center, never to be worn by a Bulls’ player again. 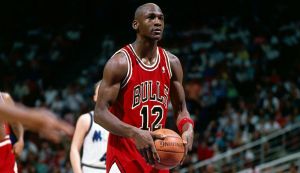 The most unusual number that Jordan sported was, in many ways, his “baseball” number.

At the start of his first return to the NBA, Jordan donned the No. 45 when he made his return to the Bulls on March 19, 1995 against the Pacers in Indianapolis.

Jordan would reveal after that and again Sunday in “The Last Dance” documentary that he did so because his father James wasn’t there to see him play. He was murdered in August of 1993, shortly before Jordan retired for the first time.

“I felt it was a new beginning,” said Jordan of the No. 45 in the documentary. “And 45 was my first number that I played in high school.”

While he was a bit sluggish in his return to the court, the No. 45 would bring out some of the old magic for Jordan the rest of the regular season. He’d hit a game-winning shot against the Hawks in The Omni in Atlanta in his fourth game back, then come up with a memorable effort at Madison Square Garden three nights later.

Jordan had his first 50-point game since returning to the NBA, putting up 55 against the Knicks while dishing out the winning assist to Bill Wennington in a Bulls’ victory.

In 17 regular season games in the No. 45 jersey, averaged 26.9 points, 6.9 rebounds, and 5.3 assists per game, shooting 41 percent from the floor. Against the Hornets in the first round, Jordan averaged 32.3 points in a 3-1 series victory, but the time for this numbers was drawing to a close.

After an 8-for-22 shooting night against the Magic in Game 1 of the Eastern Conference Semifinals in Orlando, which included a Jordan turnover in the closing moments, Jordan said goodbye to No. 45.

He donned the No. 23 again for the first time since his comeback and delivered for the Bulls, scoring 38 points while making four steals in a Bulls’ victory. He’d only get to wear it for another four games, as Jordan couldn’t help his team knock off a young Orlando team, who beat the Bulls in six games.

As for the jersey switch, the Bulls were ultimately fined $100,000 for not notifying the league office of the number switch. They wouldn’t have to worry about it again, as Jordan kept No. 23 through the next three championship season.

So the No. 45 jersey lasted just 22 games in the spring of 1995. It was a joyous time as the greatest player in the world returned to his primary sport with just a slightly different look.

Bulls release statement on the death of George Floyd

CHICAGO - Over the past few days, a number of athletes have spoken out on the death of George Floyd at the hands of a Minneapolis Police officer.

Over the past 24 hours, teams have done the same, and you can add the Chicago Bulls to that list.

Windy City Bulls get fans on the move to raise money

HOFFMAN ESTATES - Thanks to the COVID-19 pandemic, the idea of hosting a major running event is likely off the table for most of the summer.

But many of these races have gone virtual over the past few months, including a fundraiser for a local team.

CHICAGO - Since March 11th, he along with the rest of the National Basketball Association are wondering when they might take the court again.

Would it be later in the summer? Would they season be abandoned and the 2020-2021 season becomes the focus of the league in fall?

Illinois National Guard to be deployed to Chicago as unrest continues