CHICAGO – The way we remember him now was something that people thought was possible then when it comes to a 6-6 guard from North Carolina.

He showed his ability to impact the game with his moves, shot, and ability to fly towards the hoop. There were a few memorable moments, like a 63-point contest in the playoffs in Boston Garden, and they were enough to wonder just how high “His Airness” could really fly.

This was Michael Jordan in February of 1988, serving as the face for a new era of the Bulls’ franchise that was still in its infancy. It was still the league of Larry, Magic, Kareem, and Isiah, with the Lakers along with the Celtics representing the old guard in the league as the Pistons started carving out their place near the top.

The Bulls weren’t there yet, but they were close, and Jordan was on the verge of joining that group of basketball royalty. February 6th and 7th of 1988, the NBA’s All-Star Weekend at Chicago Stadium, would be the moment to help do that trick.

Michael Jordan was a great player before that weekend, and after it, superstardom awaited him.

What everyone remembers is the All-Star Saturday performance from Jordan, where his aerial acrobatics dazzled the home crowd over the course of an hour. The defending champion of the event, the guard advanced to the final where he engaged in a memorable showdown with the Hawks’ Dominique Wilkins.

The premiere dunkers in the game at that moment, the pair started off with perfect “50” dunks. Wilkins would follow with a one-handing winding slam on the baseline to earn another 50, while Jordans curling side-slam earned himself a 47, opening the door for a potential win for the Hawks’ guard on his final dunk.

But Wilkins’ powerful two-handed windmill only got a 45, leaving the door open for Jordan to tie or win it, and he didn’t flinch.

With a running start from the other end of the court, Jordan took off from the free throw line and threw down the slam, earning a perfect 50, and winning his second-straight slam dunk contest. 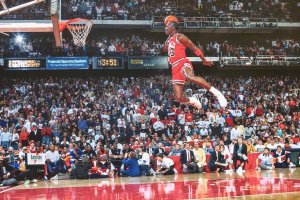 The images of that final dunk became the stuff of legends – and posters – and help propel Jordan into the conscious of the American sports landscape.

Oh, and he still had one more amazing performance to deliver the next day.

In front of a sold out Chicago Stadium crowd, with the world watching, Jordan put on a dazzling performance with and against some of the greats in the game.

With the home fans behind him, the guard played a complete game on both sides of the floor, pumping in 40 points on 17-of-23 shooting from the field. He also came up with four steals, four blocks, and eight rebounds in 29 minutes to help the East to a 138-133 victory as he ran away with first of three All-Star Game MVPs in his career.

It would serve as the jumping point for the guard’s finest season to date, and one could argue his entire career, as Jordan officially joined the elite in the league. He averaged a league-high 35 points and 3.2 steals en route to winning his first regular season MVP award along with the league’s Defensive Player of the Year. He also helped the Bulls to their first 50-win season since the 1973-1974 campaign, and their defeat of the Cavaliers in the first round of the playoffs was their first postseason series win since 1981.

You know what happens after that.

More MVP awards, six championships, and arguably the greatest career in the history of professional basketball. We all know Michael Jordan now, but 32 years ago, fans were still learning all about him, and over the course of one weekend a Chicago Stadium, a superstar was born.

CHICAGO - With the NBA seasons on hold due to the COVID-19 pandemic and no return in sight, the league is getting creative with ideas to keep competition going amongst the players.

Their latest idea will include a member of the Bulls, who will take part in a 16-player tournament online.

CHICAGO - There are plenty of examples of how much daily life has changed here and the rest of the world over the last three weeks.

A great example is a venue to which the Chicago Bulls and Blackhawks call home. It has seen a drastic change in purpose over the last 21 days.

CHICAGO — The long-awaited look at Michael Jordan’s last championship season with the Chicago Bulls is finally set for release.

ESPN and Netflix announced on Tuesday that the 10-part documentary series called “The Last Dance” will run in the U.S. over five consecutive Sunday nights starting April 19 and running through May 17. There will be two hour-long episodes on each of those nights, airing back-to-back at 9 p.m. and 10 p.m. Eastern.

‘We need a miracle’: Entire family tests positive for COVID-19, father in ICU

A guide to surviving financially as bills come due

‘We need a miracle’: Entire family tests positive for COVID-19, father in ICU