MEDINAH, Ill. – His heyday came when he was just a small kid, but what he did in two sports during his career was enough to make an impression on a young golfer.

That’s what the chance to play with Bo Jackson during the Pro-Am of the BMW Championship was something the leader of the Fed Ex Cup at the moment couldn’t pass up.

“Obviously, he’s probably the greatest athlete ever,” said Brooks Koepka on Wednesday morning, and he got the chance to compete with him for just a little bit.

As part of the Pro-Am, the former MLB and NFL star was paired with the four-time major champion for a round on Medinah Country Club’s championship No. 3 course. It was such a special occasion for Koekpa that he even had a special pair of Nike shoes made for the round, featuring a take on the famous “Bo Knows” campaign of the 1990s. 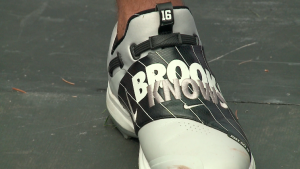 “It’s cool to get to meet him. Obviously watching so much of what he was doing when I was a little kid, it’s so cool to see. He’s so athletic,” said Koepka of Jackson, who made an All-Star Game in the MLB and a Pro Bowl in the NFL. “Just talking to him, he’s such a nice guy. I enjoyed today, I hope he did as much as I did.”

Maybe he’ll give Koepka some luck as he tries to complete another outstanding year with a Fed Ex Cup title. He’s got three PGA wins this season – including the PGA Championship in May – and currently leads the standings by six points over Patrick Reed. He won the first of three cup playoff tournaments last week, coming home with the victory in The Northern Trust.

It will be the first time that Koepka plays competitively at Medinah, which is hosting its first major event since the 2012 Ryder Cup.

“It’s cool to see everything that you’ve seen with the Ryder Cup and all the history behind it. It’s a special place,” said Koepka. “Tough golf course, playing a little soft, but, of course, in great shape, so it should be a fun week.”

Certainly, it was a great start for the golfer who everyone will be chasing this weekend.

NEW YORK - After the NHL set out a plan to get their season going after it was suspended in March, the attention turned to the NBA and when they might get going again.

While there has been discussions over the last few weeks on how to return, including confirmed consideration of Disney's Wide World of Sports as a site, nothing else was set in stone.

Challenge Cup gives the Red Stars, NWSL a chance to take the field for the first time in 2020

CHICAGO - It's not the scenario they'd hoped to have coming off their best finish in franchise history last fall, but the Chicago Red Stars are not alone.

Many teams in many leagues have watched their hopes for this year get twisted due to the COVID-19 pandemic, with shortened seasons or completely revamped formats in the second half of the year.