PHILADELPHIA – It was the perfect moment for a symbol to emerge that represents a healthy amount of the Bears’ fan base at the moment.

It was just a few seconds after former receiver Alshon Jeffery completed a dominant first half against the Bears as a member of the Eagles with a touchdown with five seconds to go in the second quarter. The score was 23-0 and about to increase to 24 when a sign rose from the front row of the back of the endzone at Lincoln Financial Field. 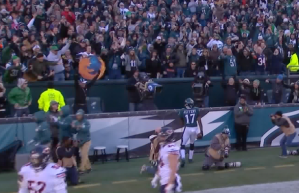 What this person is holding is the logo for the Mozilla Firefox web browser. It’s been popping up here and there on Social Media among Bears fans since the team’s chances of making anything of the 2017 season started to disappear.

“Firefox.” Get it? Now you know why it’s the rallying cry of this fan in the endzone and increasingly more Bears fans as the games in the second half of the season pass by.

As if losing to a Packers’ back-up and then on a missed field goal against the Lions at home weren’t bad enough, then came this debacle in Philadelphia.

It was a mismatch not quite from the start – thank Akiem Hicks for two tackles-for-loss on the first drive for saving that – but it was close. Even two forced fumbles in the first quarter weren’t enough to get the Bears going. The team failed to get a first down in the first half, then rushed for six  yards for the entire game.

The defense didn’t fare much better against NFL MVP candidate Carson Wentz, who offered a bit of hope to Bears fans for the future as he tore them apart in present. The second overall pick in last year’s draft, the second-year quarterback was 23-of-36 for 227 yards and a trio of touchdowns that made this one a laugher early.

Maybe hope that Mitchell Trubisky could do the same in 2018? Perhaps, at least that’s the hope. You couldn’t see it on Sunday, where an overmatched rookie threw a pair of picks and was 17-of-33 for 147 yards with little going at all.

Speaking of lack of momentum, it appears that’s what is happening with Fox as the weeks go by. Now 12-31 in just over two-and-a-half years with the Bears, there hasn’t been any sustained hope of a turnaround with the coach that made it happen in two previous stops in his career in Carolina and Denver.

Patience is wearing thin with the fans, including the one with the “Firefox” logo in the endzone on Sunday. With hopes for an offensive mind to develop the franchise quarterback in development, the thought is that this is indeed the farewell tour for Fox in Chicago.

“I’ve answered this plenty of times. You don’t come into this job, whether it’s as a player or a coach, with questions about your job security,” said Fox when asked about his job after the loss. “That’s not why I do this. Whatever happens to the things I control, I’ll work to control – and that’s to get our football team better.”

Hicks, unlike others, argues that Fox could still be the man to do so.

“The way he handles the team and the way he carries himself. Whether you as a player are having an up day or a down day, whether it is in practice or a game, he is the first one there to tell you why you are there and why they want you there,” said Hicks, who told reporters that he’d love to have Fox back as coach in 2018. “He motivates you properly and works you hard.”

While that may be the case, it’s not translating into results, as fans continue to show their displeasure with words and creative signs as 2017 winds down.

TOPEKA, Kan. (AP) — Bob Dole, who overcame disabling war wounds to become a sharp-tongued Senate leader from Kansas, a Republican presidential candidate and then a symbol and celebrant of his dwindling generation of World War II veterans, has died. He was 98.

His wife, Elizabeth Dole, posted the announcement Sunday on Twitter.

NORTH CHICAGO, Ill. — A 22-year-old man was shot to death early Sunday morning in North Chicago, according to police.

Police said officers arrived at the 2000 block of Kristan Avenue at approximately 3:10 a.m. for a report of a person shot.

WASHINGTON (AP) — As the Supreme Court court weighs the future of the landmark 1973 Roe v. Wade decision, a resurgent anti-abortion movement is looking to press its advantage in state-by-state battles while abortion-rights supporters prepare to play defense.

Both sides seem to be operating on the assumption that a court reshaped by former President Donald Trump will either overturn or seriously weaken Roe.

Non-profit works to get holiday lights up on South Side

Can a simple piece of equipment protect your catalytic converter from theft?