Novice experts in Chicago sports understand the power of these  combinations of month, date, and year.

Super Bowl XX, the White Sox world championship, and the Cubs 108-year streak-breaking night – anniversaries that can usually be recited easily for the fans of each team.

If you recalled what happened a decade ago, you probably had to look it up to make sure you didn’t miss the day. It shouldn’t be that way, considering it was just one of two days like it in the history of the city.

Ten years ago Saturday, the Chicago Bears won the National Football Conference championship. It’s arguably the last great moment for the proud franchise that has fallen on hard times since.

It had all the makings for a classic afternoon. The Bears were in their first conference title game since the 1988 season, having snapped their four-game losing streak in the divisional round the week before again Seattle.

Meanwhile the Saints were the story of the NFL season, embodying the spirit of recovery of their Hurricane Katrina-ravaged city in a surprise 2006 season. From a team without a home to the second seed in the playoffs, Drew Brees and Co. were America’s darlings.

The Bears wrecked that narrative.

Gould got the points early as the Bears led 16-0 but Reggie Bush flipped in the endzone to make it a game again in the third quarter. A plucky Chicago defense, which collected four turnovers on the day, turned the tide when they forced Brees into an endzone intentional grounding for a safety.

Like clockwork, snow showers picked up in the fourth quarter as the Bears pulled away. Bernard Berrian’s 33-yard touchdown catch was nice, but the picture capture afterwards with him and Desmond Clark brought the contest’s everlasting image. 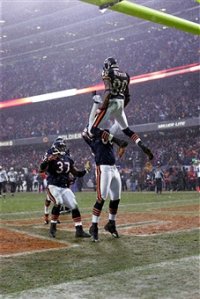 Indeed it was representative of a fan base flying high at that moment. Touchdown runs by Cedric Benson and Thomas Jones capped a 39-14 win and the Bears’ first NFC title since 1985.

So why doesn’t that day ring top of mind for Bears fans? Mainly because of what happened two weeks later – February 4, 2007 – when the Bears’ effort matched the sloppy weather in a 29-17 defeat to the Colts at Super Bowl XLI in Miami Gardens, Florida.

“Tropical Depression”, it seems, trumps a “Winter Wonderland” when it comes to the legacy of a season.

But is that the reason January 21, 2007 doesn’t roll of the tongue of Bears fans? Probably, since losing in the Super Bowl had a major adverse effects on the franchise moving forward. Since that win, the Bears have just a single playoff victory – January 16, 2011 – in the Divisional Playoff against Seattle.

Ten seasons, one postseason, one win. This cold day in January was the last great taste of success for the Bears.

Now it’s buried in a malaise of frustrating losses, infuriating teams whose September promises froze up in December. Fans could only dream of their teams being playoff competitive in the twelfth month of the year – considering it hasn’t happened since 2013.

As you now recall what happened ten years ago, the next question is simple? When might it happen again?

Here’s something to feel a bit better. Thanks to injuries, the frequent movement of players and coaches, the NFL’s window for success is much shorter than usual. Unlike other sports, a title window can be one-to-two years and that’s it.

Super Bowl 50’s two participants last year – Carolina and Denver –  failed to make the playoff this season. The Cardinals’ went from the NFC Championship to missing the playoffs. The Colts – considered the next dynasty under Andrew Luck – have sputtered to two playoff-less seasons after an AFC Championship game appearance.

Despite their loss in the Divisional Round, the Cowboys made a nine-game improvement in 2016 with a robust offensive line and two great rookies on offense. The Raiders’ five-game improvement ended a 14-year playoff drought this year.

Hence there is a bit of hope the Bears could make a turnaround quickly and could find themselves playing in January for the first time in seven seasons. Younger players like Leonard Floyd, Jordan Howard, and Cody Whitehair are evidence of GM Ryan Pace’s competence in drafting.

Free agents have been hit-and-miss like usual, but all are good enough to earn this Bears administration at least one more year together.

After a 3-13 season, this hope is all hypothetical. Reality is reality and, at the moment, happiness for Chicago pro football fans rests in anniversaries like Saturday.

January 21, 2007. Remember that day if you are a Bears fans. Who knows when another date might top it again soon.

CHARLOTTE - Just two days earlier, he was talking about how difficult it was to not have the chance to make as many plays in his first year in the NFL as he was in his final year at Notre Dame.

Through five games, Cole Kmet was targeted three times by either Mitchell Trubisky or Nick Foles and had only one catch in Week 2 against the Giants. He even met with the starting quarterback and veteran tight end Jimmy Graham on Friday to talk about first year with Bears.

CHARLOTTE - It's OK if you're a bit in the middle when it comes to the Bears' first six games of the season. It's human nature.

Some might say to just forget about the details and just enjoy the Bears' 5-1 start to the season. It's their best in eight years, and just their third over .500 record after six games the past decade. With seven teams now allowed in the playoffs, it could be enough to help the steam snag a postseason spot.

CHARLOTTE - If you're tuning in on Sundays to watch the Bears and hoping for a work of art, you're probably not going to get it in 2020.

Their contests so far have been low scoring, grind-it-out affairs where the will of their defense and the finish of their offense tends to dictate a victory or defeat. It's produced some, frankly, ugly games but so far it's worked out pretty good for Matt Nagy's team.