Danny Trevathan might be the biggest scumbag in the world on this cheap hit on Davante Adams. #CHIvsGB pic.twitter.com/RlsHTKXx2D

The league cited Rule 12, Section 2, Article 6 in issuing the suspension, which prohibits “using any part of a player’s helmet or facemask to butt, spear, or ram an opponent violently or unnecessarily.”

Trevathan now has three business days to appeal. If he’s unsuccessful doing so, the earliest he can return the Bears’ active roster is Monday October 16th, following the team’s game against the Baltimore Ravens. 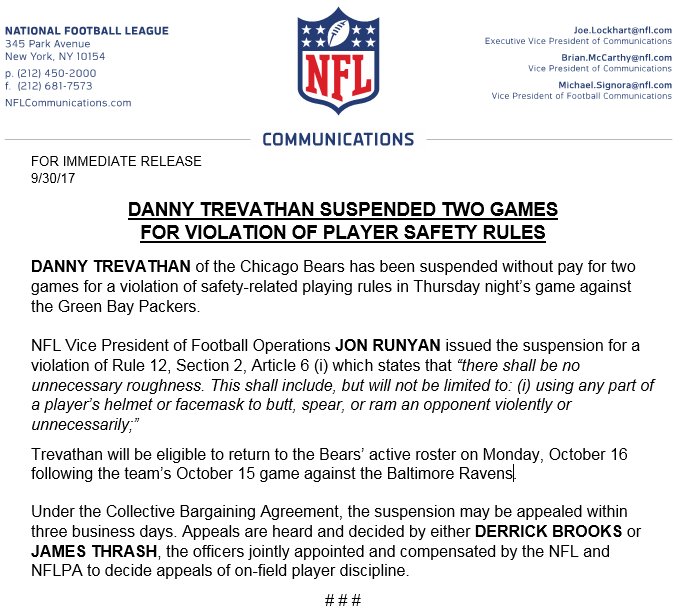 LAKE FOREST - His fourth year as a member of the Bears was shaping up to be his best.

In fact, Danny Trevathan already had three tackles against the Lions on November 10th at Soldier Field when his elbow hit the ground ackwardly while putting a hit on Detroit quarterback Jeff Driskel.

Feeling ‘100 percent’ after injury, Roquan Smith looks ahead to his third year with the Bears

LAKE FOREST - Like the majority of the Bears in 2019, his second year in the Matt Nagy era wasn't quite what it was in the first.

Roquan Smith went from playing all 16 games in his rookie year of 2018 to getting in just 12 in his second. He was a late scratch for the team's Week 4 game with the Vikings then the final three games with a torn pectoral muscle.

CHICAGO - There will be an NFL training camp in 2020, but there won't be a preseason. There is a season schedule set, but how many games they end up playing is very much to be seen.

COVID-19 is a concern for every team in the league, and the ability to prevent outbreaks of the virus could very well determine if a season is played. It's made discussions around the Bears and the other 31 teams in the NFL much different.

Sisters separated by orphanages, foster homes are reunited after 46 years

15 cent movies?! Some AMC theaters reopening on Aug. 20 with 1920s prices for one day only

COVID-19 testing is free, except when it’s not

US jobless claims fall below 1 million but remain high