Skip to content
Watch Live
Watch Live
SkyCam9: Protesters are marching on Chicago’s North Side
WATCH LIVE
WATCH LIVE
WGN Evening News
This is an archived article and the information in the article may be outdated. Please look at the time stamp on the story to see when it was last updated.

NORMAL - Deservedly the Lion's share of attention for local college basketball in 2017 has been focused on the Evanston.

When you haven't made an NCAA Tournament in the history of your program and you're well on your way to doing so, it's worthy of the attention.

But as Northwestern creeps their way towards March early in February, another team in Illinois is doing the same. It's a bit under the radar since the team is south of I-80 and not the Fighting Illini.

Yet the story of Illinois State's basketball can't be ignored no matter what your collegiate allegiance. The Redbirds are on a special run of their own as the regular season dwindles down.

If unfamiliar, Dan Muller's team is 20-5 on the season with an impressive 12-1 record in the competitive Missouri Valley Conference - often regarded as one of the best mid-major conferences. Tournament "Cinderellas" from this league have crashed the NCAA's tournament ball a number of times.

Could Illinois State be the next? At the very least it could end two decades of tournament frustration.

Not since 1998 have the Redbirds made it the dance, when Kevin Stallings' team went 25-6, beat Tennessee in the first round before losing to top-seeded Arizona in the second. Since then Illinois State has put six teams on the floor that won 20-or-more games yet never could claim an MVC Tournament to lock up their spot among the 64 or 68 teams.

One of those was Muller's team from two years ago and last year the Redbirds made it to the second round of the NIT. This season they've seemed to take the next step, starting the season 8-4 in the non-conference season that included a third-place finish in the Diamond Head Classic.

Once conference season hit they stormed out of the gate with eleven-straight victories, including knocking off perennial power Wichita State by ten at home on January 14th. Deontae Hawkins has led the way with 14.5 points per game with MiKyle McIntosh chipping in 13.5 and Paris Lee 13.4 a contest.

It's a group that's faced adversity during this run, losing McIntosh after January 25th after undergoing surgery for a torn meniscus in his right knee. At the earliest, he's return for the Missouri Valley Conference tournament which starts on March 2nd in St. Louis. It's one reason why the Redbirds' lone loss of the conference season was a 41-point drubbing in the return game with Wichita State.

Still the team endured something much more difficult to overcome - the death of assistant coach Torrey Ward.

He was killed on April 7, 2015 in a plane crash as he, deputy athletic director Aaron Leetch and five others were returning from the National Championship game in Indianapolis.

The death of the popular assistant coach remains with a number of the players Ward coached that remained on the team. 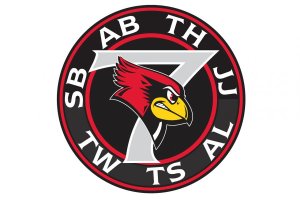 These are patches that have been worn the last two seasons by the team paying tribute to the seven lost in the plane crash, including Ward.

Lee, per a story in USA Today, has worn a pair of Jordans given to him by Ward's mother Janice every game of the MVC season which the Redbirds have won 12-of-13 games.

That inspiration may help to carry the Redbirds to a place they haven't been in nearly two decades. Five regular season contests remain before an important weekend in St. Louis awaits them to start March. Four times in the past decade they've made the championship game of the MVC tournament only to fall short.

Maybe this is the year they finally break through. They're worth watching over the next month as they hope to bring a little more madness for Illinois' college basketball fans.