Skip to content
Watch Live
Watch Live
President Trump holds news conference in the Rose Garden
WATCH LIVE
WATCH LIVE
WGN Midday News
This is an archived article and the information in the article may be outdated. Please look at the time stamp on the story to see when it was last updated.

CHICAGO – Hashtags are the millennial’s sincerest form of flattery.

One has found a way to catch on with the youngest member of the Chicago Bulls just a few months into his tenure.

“Everyday,” said Bobby Portis about the #FreeBobbyPortis hashtag which emerged early in the season on Twitter.

They came after the team’s first round draft pick out of Arkansas didn’t play in his first four games and then participated in just three of the opening 15 contests for the Bulls this season.

As the minutes failed to come, the hastag began to grow. One time Portis favorited one of these tweets from a former teammate at Arkansas. 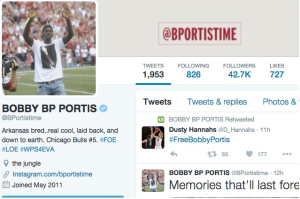 Yet it didn’t really take hold with the rookie till he finally appeared in a game at the United Center on November 9th in a blowout win over the Sixers.

“The even had #FreeBobbyPortis signs.”

Well those same Bulls fans might want to put something else on those pieces of cardboard when the comeback to the United Center in 2016. It’s more like #FreedBobbyPortis now.

In the last five games the rookie has appeared in games for the Bulls and has shown spurts of strong NBA moxy in just the opening acts of his career. Since appearing in the Bulls’ game at New York Portis has played in at least ten minutes in each of the contests as he fills in for the injured Joakim Noah off the bench.

“It’s kinda crazy, actually,” said Portis as he referred to his surge in playing time like the #FreeBobbyPortis hashtag. “Being on the bench for 20-plus games and then being in the last five, it’s just been crazy. It’s a good opportunity for me. Credit to the coaching staff and my teammate for always having trust in me just to go out there and play.”

He’ll be relied on to bring the energy that’s become the trademark of Noah during his tenure with the Bulls. For those looking ahead Portis may be looked to do that long-term as Noah along with Taj Gibson get brought up in trade talks during the next few months. It’s those players that helped Bobby get ready for the NBA during training camp and the part of the season when he did or didn’t play.

Needless to say that Portis quickly found his attributes to be similar to his fellow forwards.

“They always praised how hard I work and how hard I go,” said Portis of Gibson and Noah. “We’re in Chicago, I feel like Chicago is a blue-collar city that loves players that play hard and play with their heart. I feel like that’s the big reason why I’m here.

“They see what I can bring to the table for the future. The guys they have that trust in me.”

So do the fans. They’ve let their hashtags do the talking.

Australian zookeeper in critical condition after being mauled by lions

Costco plans to bring back free samples next month

US consumer spending sinks by record 13.6% in face of virus

Man dies after being pushed in front of CTA Red Line train: police

2 women, both 19, shot and killed on Chicago’s Far South Side

Australian zookeeper in critical condition after being mauled by lions