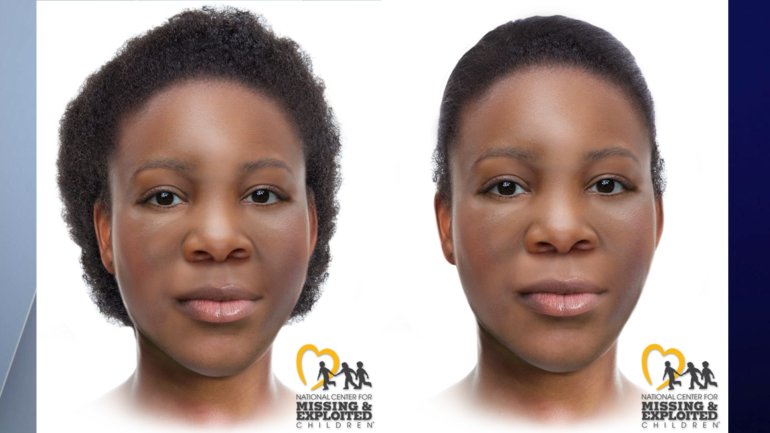 “Jane Doe,” who may be between 14 and 18-years old, was described as African American, 5 feet, 2 inches tall, 117 pounds, and has short black hair with her ears pierced.

A utility crew found a girl tied to a pole on September 16 in an alley near 20th and Pennsylvania streets.

Tuesday, the coroner said the girl died from a gunshot wound and ruled her death a homicide.

Earlier this week, authorities in Lake County said they have gathered DNA from a potential family of the girl.

Coroner Merilee Frey reportedly met with the family on Monday and took DNA from the mother to give to state police for testing.

The family is from Illinois and told Frey they have not seen their loved one for weeks.

Frey said the family submitted “limited” dental records from when the teenager was nine.

The coroner said while those records can usually confirm and person’s identity on sight, a forensic odontologist could not make a positive identification.

The coroner also released facial reconstruction images of the girl.

Police said she was wearing a blue and white Nike windbreaker, size XS. The girl was wearing a Superman branded T-shirt with “Super Girl Power” on the front and had blue and black Nike Air Max Plus shoes on, size 7.

Anyone with information about this individual is asked to call the Lake County Coroner’s Office at 219-755-3265.

(WJW) — Go ahead and mark December 21 on your calendar. That's when we can all witness something not seen in nearly 800 years.

During the upcoming winter solstice, Jupiter and Saturn will line up to create what is known as the "Christmas Star" or "Star of Bethlehem."

NEW YORK (NewsNation Now) — A suspect in the shooting of state trooper in Massachusetts was killed during a shootout with U.S. marshals in New York City early Friday that left two officers wounded.

The two deputy marshals injured in the 5:30 a.m. confrontation in the Bronx were treated at a hospital and were expected to recover.