Skip to content
Watch Live
Watch Live
Mayor Lightfoot speaks after violent 4th of July weekend, announces utility relief program
This is an archived article and the information in the article may be outdated. Please look at the time stamp on the story to see when it was last updated.

CHICAGO – A fallen Chicago firefighter who died on the job almost seven years ago was honored in a special ceremony on the South Side Saturday.

The memorial at King Lockhart Park in the city’s Beverly neighborhood is dedicated to all of the Chicago first responders who went to help in New York at Ground Zero after 9/11.

On Saturday a crowd gathered to remember beloved Chicago Fire Captain Herbert “Herbie” Johnson and to witness an unveiling that has been a long time coming. 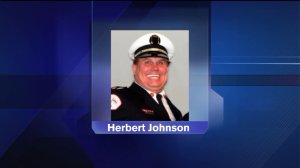 In 2001, Johnson traveled with dozens of other first responders from Chicago to New York to assist in the aftermath of the September 11th attacks. He forged deep friendships with New York City firefighters and following Johnson’s death in 2012 after battling a blaze in Gage Park, those firefighters gave the city steel from the fallen towers in Johnson’s name.

The gift sat in storage for years.

Terrence Karpowicz was the artist who created the sculpture.

“It’s a wonderful day,” Karpowicz said. “I’m elated and it’s tribute to both New York and Chicago firefighters and it’s going to stand forever. I know Herbie is looking down with a big smile on his face.”

Johnson’s family worked to raise money to make the memorial a reality.

Johnson’s daughter Laurie Johnson said she was very moved by the art and event.

“It’s a beautiful sculpture. I love it,” she said. “And I want to say thanks first and foremost to the firemen that drove it in. It’s a huge honor that they did this for us.”