BOSTON — A Connecticut woman who was hit in the face with a foul ball at Boston’s Fenway Park Friday night has been treated and released from the hospital.

Stephanie Wapenski of Branford, Conn. was sitting down the third base line in the same area where a woman was hit by pieces of a broken bat on June 5.

Wapenski said she is trying to laugh about the situation and took a selfie of her injuries. A line drive foul ball hit her right between the eyes. She talked to FOX25 after being released from the hospital with more than 40 stitches and two black eyes.

“I was watching the batter, I saw the ball go off the bat and before I could process if it were going toward me or away from me, before my mind could wrap around that it hit me,” she said. “Everything just kind of buzzed for a minute and then I could just hear commotion.”

Her brother told FOX25 that she is the biggest Sox fan ever and is always watching them, especially when the Yankees are in town.

“A lot of people seem to think she was possibly texting or something,” her brother said. “She’s not that type of fan. No she just didn’t have time to react to it.”

In fact, she and her husband-to-be were at Friday night’s game to celebrate their engagement. One year ago, he proposed to Wapenski at Fenway on the jumbotron. And he’s a Yankees fan.

Back in June, another woman suffered life threatening injuries when she was hit in the face by a broken bat. She has since been released from the hospital and is now home recovering. 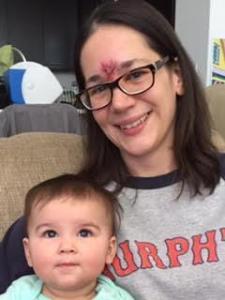