CHICAGO — A vigil and Chicago police roll call was held Wednesday evening in Chinatown after two men were killed during an attempted robbery.

Police officers conducted a roll call to show their support for the community.

Wednesday’s service was held in English, Mandarin and Cantonese. People at the vigil said this sort of crime is rare in Chinatown.

A judge denied bond Tuesday for Alvin Thomas, 20, who was charged with the fatal shooting of 36-year-old Hua Yi Bian and 38-year-old Wei Zhong Xiong.

Cook County State’s Attorney James Murphy laid out the evidence against Thomas during the hearing Tuesday. 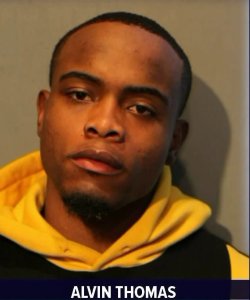 He said Xiong and his wife were returning to their apartment complex with Bian after a night out when Thomas allegedly approached the car to attempt a robbery just after 2 a.m. Sunday.

“This defendant approached victim Xiong on the passenger side and shot victim Xiong multiple times in the face and head,” Murphy said.

Then Thomas allegedly struggled with Bian, eventually firing multiple shots at him, striking him in the skull. After the shooter ran away, Xiong’s wife used her dead husband’s cell phone to call the police.

Police arrested Thomas shortly after, and say the 9-millimeter gun they found on him was the same one used in the killing.

Speaking on behalf of the victim’s families, friend Terry Wilson said the killings were senseless.

“We’ve all been impacted; we’ve all cried and we’re all angry. There’s no purpose to take a life — any life,” Wilson said.

Wilson said Xiong’s family in China depended on the money he would send home, including his 12-year-old son, mother and handicapped father.

Authorities say Thomas had violated his probation for two robberies in Boystown last July. But after the hearing, Thomas’ mother spoke to reporters, saying she doesn’t believe her son is a killer. He will appear in court again on February 24.

Friends of one of the men killed said he may have resisted because he was carrying more than $10,000 to buy a new car.

A newspaper sold in Chinatown is reporting extensively on this case and said the men were longtime friends, and are from the same town in China.

BOLINGBROOK — A west suburban teacher is taking remote learning on the road after she received enough donations to put together a bookstore on wheels, bringing new stories to students stuck at home Tuesday.

Jamie McGee Elementary School has been doing remote learning since the school year started last month. It hasn't been easy on anyone, but second grade teacher Nicole Farrar found a creative way to meet her 22 students in person.

FAYETTEVILLE, Ark. (KNWA/KFTA) — Steven J. Williams, a popular video game YouTuber better known to fans as 'Boogie2988,' reportedly fired a "warning shot" at a man who showed up at his door in Fayetteville, Arkansas on Monday.

The incident follows what Williams describes as a monthslong harassment campaign from a rival YouTuber.

CHICAGO — Despite being a perfect day to hold a theatre class outside, weather was not the reason Columbia College instructors were holding class in Grant Park.

Amid continued struggles caused by the COVID-19 pandemic, faculty believe not all classrooms at the downtown Chicago fine arts college are equipped to safely hold classes.