Quintonio LeGrier, 19, and 55-year-old Bettie Jones were in a home in the 4700 block of West Erie Street.

Police were dispatched to the address around 4:30 a.m. for a 911 domestic disturbance call.

Police say upon arrival,  they were confronted by LeGrier who was being combative.  An officer fired and struck LeGrier and Jones.

Neews Affairs says Jones was accidentally shot and killed.  They released a statement Saturday night apologizing for her death.

“Upon arrival, officers were confronted by a combative subject resulting in the discharging of the officer’s weapon which fatally wounded two individuals. The 55 year old female victim was accidentally struck and tragically killed. The department extends it’s deepest condolences to the victim’s family and friends.”

“The officer(s) involved will be placed on routine administrative duties for a period of 30 days. This new policy which was implemented by Superintendent Escalante, will ensure separation from field duties while training and fitness for duty requirements can be conducted. Going forward, this will be standard protocol following all officer-involved shootings.” 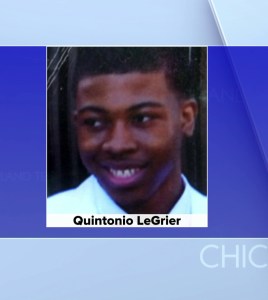 LeGrier’s mother Janet Cooksey says her son was home visiting from college at  Northern Illinois University. She says recently, her son had been suffering from mental illness.

Cooksey says her son opened the front door holding a baseball bat and she feels in this case, police were too quick to pull the trigger.

“Somebody has to be accountable,” she said. “I know they have a job, they should be trained in these situations.  It’s like you call for help and you lose someone and that has to stop.”

Jones’ brother says his sister was the mother of four daughters and a son. Her children range in age from 19 to 38. They include 19-year-old twins.

Melvin Jones told the Chicago Tribune that more than a dozen family members celebrated Christmas with Bettie Jones on Friday. Jones says his sister “had an excellent Christmas.”

Jones was a neighbor of LeGrier and lived in a first-floor apartment with her boyfriend. Melvin Jones says he’s “numb right now.” He says there is “a whole lot of anger, a whole lot of tears.”

Mayor Rahm Emanuel is vacationing in Cuba with his family, but his office released a statement from him Saturday afternoon.

Emanuel says that “anytime an officer uses force the public deserves answers, and regardless of the circumstances, we all grieve anytime there is a loss of life in our city.”

Police said the shooting is under investigation and the case has been referred to the city’s main police oversight agency, the Independent Police Review Authority.   That agency says it will not discuss active investigations.

From rock bottom to top of the world: Chicago man’s …

Services held for Army veteran shot and killed while …

Anne Heche not high at time of fiery crash: coroner

Comedian Pat McGann is performing at The Chicago …