WHEATON, Ill. — Tuesday was day one in the trial of a Naperville woman accused of fatally stabbing her 7-year-old son, a 5-year-old girl she was babysitting and two family dogs. 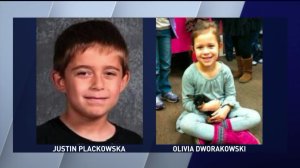 Elzbieta Plackowska, 45, has been in custody for almost five years for the 2012 murders.

Plachowska admitted to the murders, but the trial is to determine if she was insane when she did it on October 30, 2012.

DuPage county prosecutors said she killed the kids and the children’s two dogs because she was angry and felt unappreciated. They say she told doctors she was “so tired of this life.”

She also told doctors that she saw the devil who told her to kill. She had stabbed the boy 173 times.

Defense attorneys said she was on the manic end of a bipolar episode that was triggered by the death of her father a few weeks earlier.

In court Tuesday, she sat in the room, her hair brown now, and, with her hands in her face. She occasionally cried.

The first witness for the prosecution was Marta Dworakowski, Olivia’s mother, who came home that night from work as a nurse, to find her front door locked from the inside.

She tried frantically to get in touch with her babysitter, Plachowska, went to her home and then called police when no one answered.

Police found the bloody scene at Dworakowski’s home which was described by lead prosecutor state’s attorney Bob Berlin as a scene of unimaginable horror.

Judge Robert Miller will hear lots of expert testimony from doctors and then decide if Plachowska will spend the rest of her life in prison or a mental institution.

Prosecutors said Plackowska killed her son to get back at her at husband, a trucker who spent time traveling away from home.

The trial is expected to last about two weeks.

Taliban replace ministry for women with one restricting them

KABUL, Afghanistan (AP) — Afghanistan's new Taliban rulers set up a ministry for the “propagation of virtue and the prevention of vice" in the building that once housed the Women's Affairs Ministry, escorting out World Bank staffers on Saturday as part of the forced move.

It was the latest troubling sign that the Taliban are restricting women's rights as they settle into government, just a month since they overran the capital of Kabul. During their previous rule of Afghanistan in the 1990s, the Taliban had denied girls and women the right to education and barred them from public life.

Afghan survivors of US drone strike: Sorry ‘is not enough’

KABUL, Afghanistan (AP) — Sorry is not enough for the Afghan survivors of an errant U.S. drone strike that killed 10 members of their family, including seven children.

Emal Ahmadi, whose 3-year-old daughter Malika was killed on Aug. 29, when the U.S. hellfire missile struck his elder brother's car, told The Associated Press on Saturday that the family demands Washington investigate who fired the drone and punish the military personnel responsible for the strike.

The North Port Police Department tweeted that Laundrie's family believes he went to the reserve earlier in the week. His family previously said he was last seen Tuesday while wearing a hiking bag with a waist strap.

Violent 12 hours in Chicago raises concerns for weekend ahead

No ruling in case of Ronald Kliner, convicted in 1988 murder-for-hire

Violent 12 hours in Chicago raises concerns for weekend ahead

Taliban replace ministry for women with one restricting them

Afghan survivors of US drone strike: Sorry ‘is not enough’