MT. ORAB, Ohio – A 7th grader at an Ohio middle school was told to cover up her school dance dress because her bare arms were reportedly deemed “sex objects” by school authorities.

WKRC reports Ari Waters was told her dress violated the school’s dress code. A male teacher told her to put on her coat over the sleeveless dress. Another student in a spaghetti strap dress was told the same thing.

Ari asked her mother to come pick her up from the dance because she felt embarrassed. Her mother, Gina Waters, demanded an explanation from the vice principal.

“I said what’s wrong with her bare arms? And she said, ‘They are sexual objects,’” Gina told WKRC. 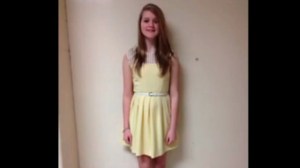 The principal at Mt. Orab Middle School, Sabrina Armstrong, denied her vice principal called Ari’s bare arms “sex objects.” The school’s dress code clearly states that tank tops are not allowed. But it does not discuss sleeveless clothing. She released the following statement:

“Mt. Orab Middle School has an adopted dress code that we require all students to abide by for school functions. Administration is required to make sure students follow the dress code. Several weeks before a school dance at Mt. Orab Middle School, the students were explicitly told that the dress code should be adhered to.  There were three to six students that evening at the dance who were asked to put on a sweater to cover their sleeveless attire.  The student in question was among one of the three to six students who were asked and she put on her coat and stayed at the dance.
As for the other allegations, the district has looked into the situation and deemed them to be unfounded,” Armstrong wrote.