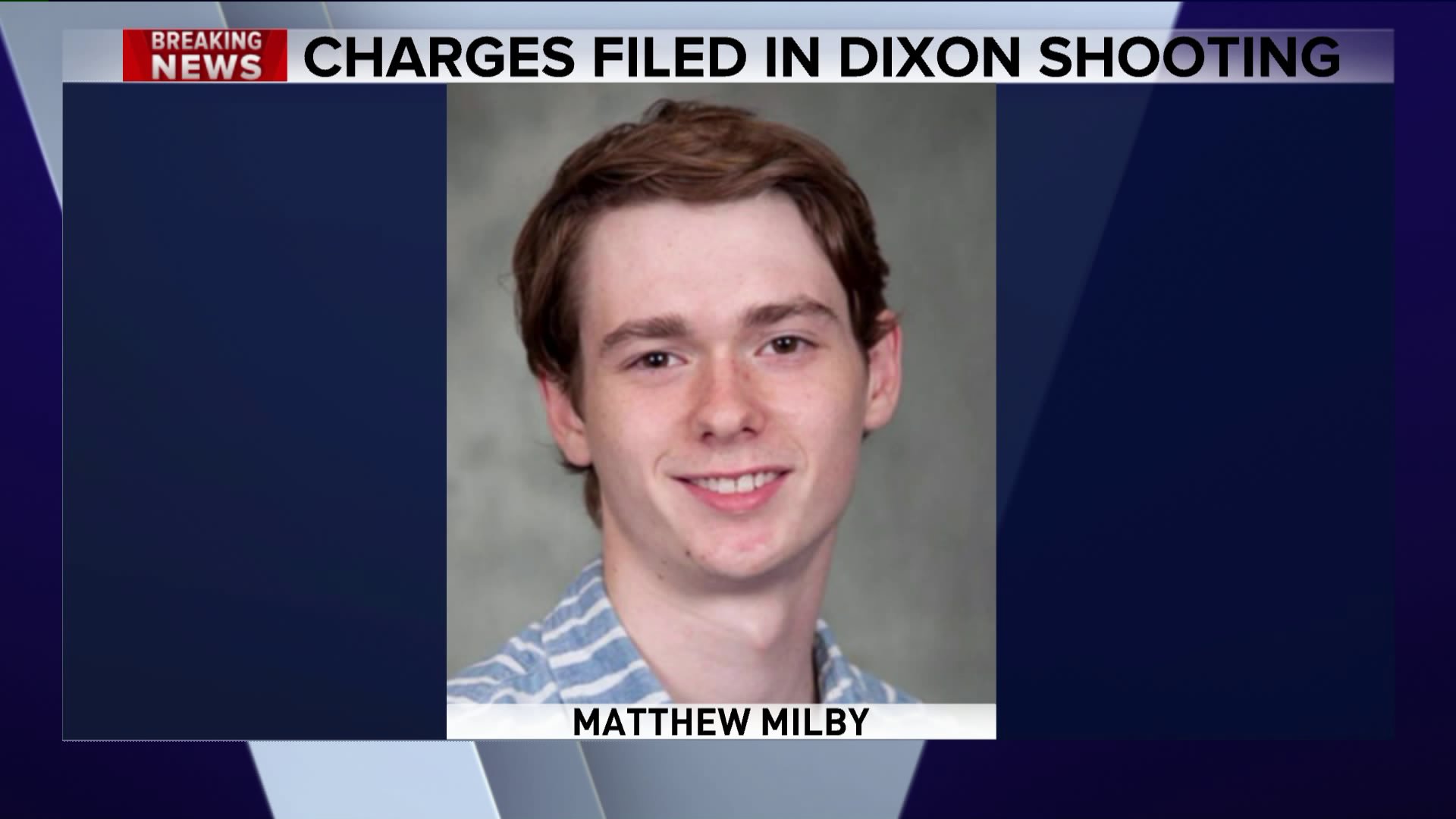 DIXON, Ill. — An armed student who was shot at Dixon High School on Wednesday after exchanging gunfire with an officer has been charged.

Matthew Milby, 19, is now facing three felony counts of aggravated discharge of a firearm, according to Illinois State Police.

He is being held on a $2 million bail and is being treated for his injuries.

More charges may be possible.

It all started about 8 a.m. Wednesday inside the school at 300 Lincoln Statue Drive. Authorities said Milby fired several rounds at an officer, who returned fire — shooting and wounding Milby. The officer was not injured, and Milby was taken into custody.

A woman who identified herself as Milby’s mother addressed reporters Wednesday and said her son had been “very sad” for a very long time.

The woman said her son was bullied and ostracized at school, and was beaten up in October. Officials initially described Milby as a former student, but the woman said Milby still attended Dixon High School, where he worked independently out of the principal’s office. He was slated to attend graduation rehearsal Wednesday, the woman said, but instead showed up with a gun.

The woman said she didn’t know where her son got a gun and that she does not keep guns in her home. Milby was shot twice, once in his shoulder, she said.

"My son has been very very sad for a long time"
Mother of 19 year old who exchanged gunfire with police at Dixon, IL high school says her son was bullied as a student. More on @WGNNews at 4pm. @MarcellaWGN pic.twitter.com/k1tjWHNf4N

No other injuries were reported.

Officials identified the officer who stopped the shooter as Mark Dallas. He is being hailed a hero.

The school was on lockdown Wednesday morning. Parents with IDs were told they could pick up students at a nearby baseball field.

CHICAGO — A 14-year-old boy was injured in a shooting in the city's Woodlawn neighborhood Saturday night, according to police.

Police said the boy was in the 6500 block of South Champlain Avenue at approximately 6:45 p.m. when he sustained a graze wound to the neck from an unknown perpetrator.

AUSTIN (KXAN) — Austin police confirmed Saturday afternoon one suspect is in custody and another is still at large in connection with a mass shooting in downtown Austin that left at least 14 people hurt early Saturday morning.

CHICAGO — Two 17-year-old boys were injured in a shooting on the border of the city's North Lawndale and South Lawndale neighborhoods Saturday afternoon, according to police.

Police said the boys were in an alley in the 3500 block of West Cermak Road at approximately 3:23 p.m. when a light-colored vehicle pulled up and an unknown perpetrator inside opened fire.

Carjacker returns 3-year-old to woman he stole car from

Will eating cicadas get me high? Myths debunked

‘Friends’-themed cruise to set sail in May 2022, offer ‘immersive vacation experience’ for fans

Signs of heatstroke: What to do if you spot these 8 warnings

13 injured in Austin shooting; suspect not in custody

Defendant kills himself in courtroom after hearing verdict

Why are some people hit with side effects after getting the COVID-19 vaccine?

Child tax credit checks: These are the dates the IRS plans to send payments

Voila! Just like that, app turns your photo into a cartoon