CHICAGO — Wisconsin authorities say a suspect in the shooting death of a 7-year-old Chicago boy has been arrested.

The Douglas County sheriff's office says a 20-year-old man was arrested Wednesday by deputies and U.S. marshals at a home in Superior, Wisconsin. The city is about 460 miles northwest of Chicago near the Minnesota-Wisconsin state line.

Authorities say the man is being held on a first-degree murder warrant in the July 4 slaying of Amari Brown. The boy was with his father at the time of the shooting. 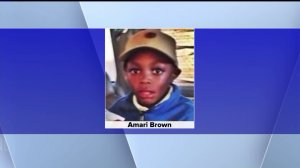 McCarthy complained the father was released on bail after his April arrest on a gun charge, saying, "If Mr. Brown is in custody, his son is alive."