CHICAGO – A seven-story pile of cars in a scrap yard caught fire at 9:30 Sunday morning in Lincoln Park.

Dan O’Donnell knew something was wrong when he left home this morning for church. “I saw black smoke coming across Armitage, and it kept getting darker and darker,” he said.
The Chicago Fire Department responded to the hazmat situation at General Iron Industries, located near the intersection of Cortland and Marcey.
“It’s a large pile of unprocessed scrap, so you have cars, refrigerators, anything you could think of that someone would take to a scrapyard,” said Joe Roccasalva of the Chicago Fire Department.
The scrapyard’s riverside location required the use of the Chicago Fire Boat, Engine 2. “There are no hydrants here on this side of the river, so we are providing water from the river to engine 55, and they are applying it to the fire,” said Bob Lund, the boat’s pilot.
Two hours later, crews extinguished the fire. However, the Chicago Fire Department’s work continued well into the afternoon, monitoring air quality and testing for toxic emissions nearby.
“I know it’s been a problem for a while,” said Lincoln Park resident Todd Hatfield.”You’re breathing this stuff in, and I think that’s a big issue. The air quality around this facility that it pumps out, the wind is blowing, and it goes right this way into the community.”
“This is the second major fire and explosion of this type this year at this facility, and we believe that there is a real problem here,” said 2nd Ward Alderman Brian Hopkins. He calls the facility “toxic,” and would like to see General Iron shut down. “They have been fined numerous times for environmental violations here, and they are currently under investigation from OSEA as a hazardous workplace.”
General Iron’s management worked this afternoon in heavy equipment, trying to salvage what they could. They were not available to speak with the media. A fire investigation is underway. 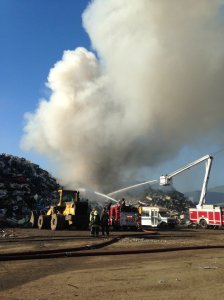 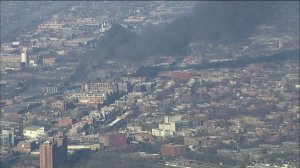 This is a developing situation. Please check back for more details.