CHICAGO — As a state-hired consultant studies the economic feasibility of a casino in Chicago, Mayor Lightfoot released a list of possible locations on the South and West Sides Wednesday.

“While a Chicago casino had been talked about for more than 30 years, today we are moving forward to ensure the new casino is viable for Chicago and all of its communities,” Lightfoot said in a statement. 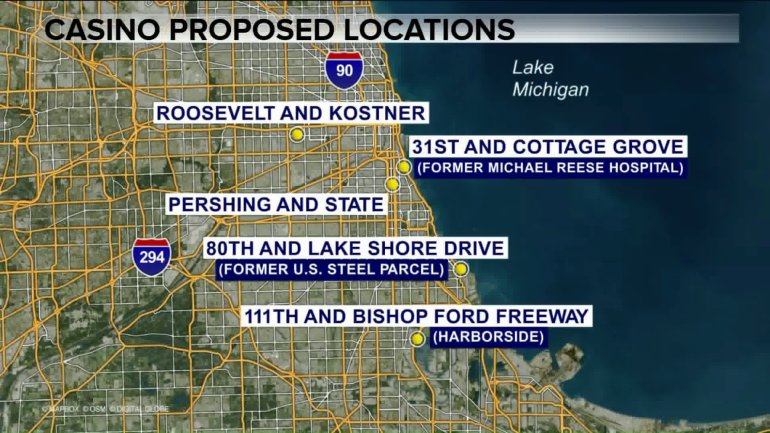 Notably not on the list are Navy Pier and McCormick Place. Officials also caution the suggested spots are just test sites, and the casino won’t necessarily end up at any of them.

Donna More, the former general counsel to the Illinois Gaming Board, said the idea of a casino in Chicago is coming to fruition after years of planning.

“Part of what you want a Chicago casino to do is help economic development not only for the city as a whole, the state as a whole, but for the location where it is,” More said. “You want to put it in a location that’s going to help create jobs, create new ancillary businesses, better infrastructure in that area, better roads in and out.”

The Chicago development would be one out of six new casinos authorized under Illinois’ gaming expansion. The city has hired Union Gaming Analytics as an outside consultant. The hope is the casino generates massive new revenue for city pensions.

Not everyone is thrilled, as 4th Ward Alderman Sophia King strongly opposed to the Michael Reese Hospital site under consideration.

“Casinos are known to have deleterious impacts on existing communities, especially communities of color,” King said in a statement.

Union Gaming has until August 12 to prepare its report, and the Gaming Board weighs in after that.