Skip to content
WATCH LIVE
WATCH LIVE
Chicago’s Best
This is an archived article and the information in the article may be outdated. Please look at the time stamp on the story to see when it was last updated.

CHICAGO -- Pope Francis wrote a letter to Cardinal Blase J. Cupich, the Archbishop of Chicago, conveying his thoughts and prayers to the people of the city and those who have suffered loss in the face of violence.

In the letter, the pope assured Cardinal Cupich his support for what the cardinal and other local community leaders are doing to promote nonviolence as a way of life in the city. 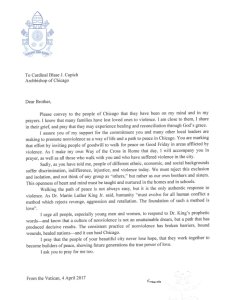 The pope also expresses concern over discrimination and the "otherizing" of groups of people. He cites Dr. Martin Luther King's efforts in nonviolence, quoting his remarks about how humanity "must evolve for all human conflict a method which rejects revenge, aggression and retaliation. The foundation of such a method is love."

The Archdiocese of Chicago and its Parishes and Ministries announced that they are launching an anti-violence initiative in order to identify and counter the root causes of violence in the city.

Dear Tom,When I was younger, my grandma used to tell me if you could see the backs of the leaves on a tree, it was going to storm. Your thoughts?Cheryl Molenda Dyer, IndianaDear Cheryl,Weather folklore tales usually have a basis in scientific fact, and in the case that you have asked about, the explanation does make some meteorological and botanical sense. First off, it is important to understand that tree leaves are reacting to the weather right now and not forecasting a day or two ahead. Winds at the onset of rain and summer thunderstorms are often gusty and shifting, the kind of wind that will readily flip over tree leaves. Humidity also plays a factor since it is usually high before it rains. Moist air softens leaf stems, allowing the storm's gusty winds to lift and turn the leaves more easily.

PORTAGE, Ind. -- A 9-year-old girl drowned while swimming in a private lake near a camping area in northwest Indiana Sunday evening, according to the Indiana Department of Natural Resources.

Officials said in a statement the girl was swimming in a lake at the Lakeshore Camp Resort in Portage, and began struggling in the water after she swam away from a platform.

Republican Sen. Lindsey Graham, the chairman of the powerful Senate Judiciary Committee, said Sunday that he will grant a request by Democrats to have former special counsel Robert Mueller testify about his investigation before the committee.

Graham's comments follow an op-ed by Mueller published Saturday in The Washington Post, in which the former special counsel defended his office's prosecution of Roger Stone and wrote that he is still a convicted felon and "rightly so" in light of President Donald Trump's commutation of Stone. Mueller was appointed in May 2017 to investigate Russian interference in the 2016 presidential election.

First US federal execution in 17 years is back on, for now

17 sailors, 4 civilians injured after explosion and fire on naval ship in San Diego

17 sailors, 4 civilians injured after explosion and fire on naval ship in San Diego