CHICAGO – Despite recent calls for her resignation,  Cook County State’s Attorney Anita Alvarez is leading her two Democratic challengers, according to a new Chicago Tribune Poll.

The poll of 968 registered Cook County Democratic voters conducted by phone from January 20 – 28 shows Alvarez with 34 percent support, compared to 27 percent for Kim Foxx and 12 percent for Donna More.
An additional 26 percent  say they backed another candidate or were undecided.
Alvarez is seeking her third term as State’s Attorney.
Protesters have called for her resignation over dissatisfaction with her job performance and the handling of the Laquan McDonald shooting.

Van Dyke was not charged with his murder until more than a year after the shooting, hours before a court-ordered release of police dashboard camera footage of the shooting.  Alvarez defended the long delay, saying the shooting case was more complicated because a police officer was involved.   She added that her office was working with the U.S. Attorney’s office on the investigation.

Activists began calling for her resignation in December.  Alvarez has refused to step down, saying she was elected to the job and the voters will have a chance to remove her if they are unhappy with her performance.

The primary election is March 15. 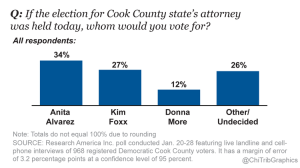