CHICAGO — Despite hinting that Chicago's dire budget situation could force the hammer to drop on taxpayers, Mayor Lori Lightfoot said Wednesday her 2020 budget is balanced without including a massive property tax hike.

"I am here to tell you that we didn’t solve our $838 million budget gap with a large property tax increase in 2020, and folks that’s good news," Lightfoot said.

Chicago is staring down an $838 million budget deficit, but despite that staggering figure the mayor is proposing $51.8 million in new spending, including $10 million for affordable housing and $9 million for violence prevention.

New investments are offset by $537.6 million in savings and efficiencies. One savings proposal includes refinancing $1.3 billion in debt to generate $200 million right away.

There's also $352.2 million in new revenue. Mayor Lightfoot wants to raise $47 million from taxing downtown congestion, including a 53 cent increase on downtown solo Uber and Lyft rides. She is also proposing $37 million in service and sales taxes, including asking people who dine in Chicago restaurants to pay more for food and drinks. 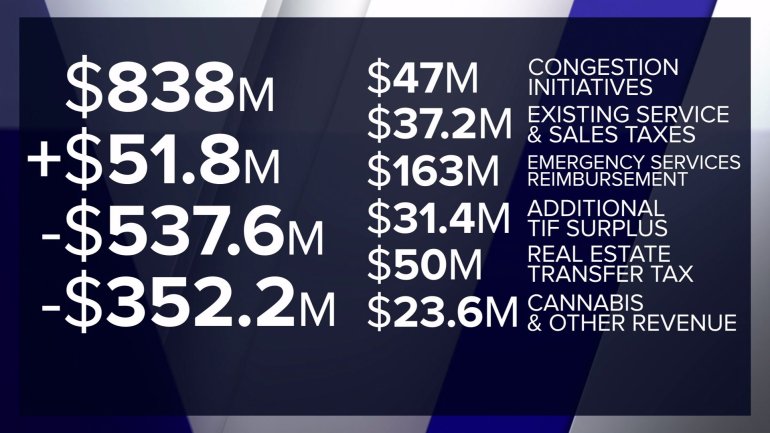 Additional revenue will flow from the state, including recouping $163 million more for emergency services and a $314 million TIF surplus. A proposed $50 million Real Estate Transfer Tax requires approval from Springfield, but the mayor is counting on it now.

"This budget was created to honor our responsibility as good stewards to our residents and taxpayers," Lightfoot said.

Laurence Msall of the Civic Federation calls the budget a good start.

"This gets you through the first year, I think the mayor talked about that in the speech. The city has some ongoing financial challenges," Msall said.

"This budget was something that was thrown up against the wall and we’re going to find out what sticks," said Alderman Anthony Beale (9th Ward).

A spokesperson for Governor Pritzker said he will encourage the General Assembly to give the mayor’s proposal their full consideration during the veto session.

MADISON, Wis. — Wisconsin’s presidential primary election will proceed Tuesday under an order from the state Supreme Court that came just hours after Democratic Gov. Tony Evers tried to postpone voting as part of a last-ditch effort amid growing fears over the coronavirus.

The court ruled 4-2 on Monday that Evers lacked the authority to move the election on his own. Conservatives control the court 5-2, but one of the conservative justices is up for reelection Tuesday and didn’t participate in the ruling.

MILWAUKEE — The Democratic National Committee is delaying its presidential nominating convention until the week of Aug. 17 after prospective nominee Joe Biden said he didn't think it would be possible to hold it in mid-July because of the coronavirus pandemic.

Acting with unity and resolve unseen since the 9/11 attacks, Washington moved urgently to stem an economic free fall caused by widespread restrictions meant to slow the spread of the virus that have shuttered schools, closed businesses and brought American life in many places to a virtual standstill.