Decision 2018: In-Depth Look at the Candidates

Governor Bruce Rauner angered Republicans when he signed a bill providing protection for undocumented immigrants in Illinois. Conservatives mostly stuck with him, but then the governor changed course on abortion.

“I personally am pro-choice, I always have been,” he said.

In September, Rauner signed into law a bill expanding taxpayer funded abortions, to include women on Medicaid and those covered under state health care plans.

“I am being true to my values and my views. I have always been true to those,” he said.

Among conservatives, there was an explosion of anger.

GOP lawmakers said behind the scenes, Rauner told them he would veto the bill.

Even Cardinal Blase Cupich weighed in on the betrayal, telling the Chicago Tribune that Rauner broke his word. 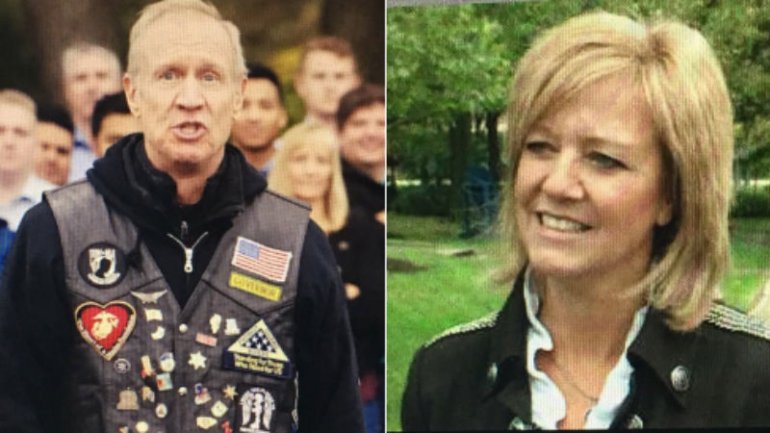 Conservatives went shopping for a candidate, and they found State Rep. Jeanne Ives of Wheaton.

“Governor Rauner has failed the integrity test in many ways,” Ives said.

But Rauner believes he is on the right track. He says his pro-business, union-weakening reforms are the right medicine for a state that lost 33,000 residents last year alone.

“Illinois still needs property tax relief, real term limits and a budget that won’t bankrupt or break us,” Rauner said in one of his re-election videos. “I choose to fight.”

When Ives started raising funds for a campaign, Rauner dismissed her.

“It’s part of the process, you get some fringe candidates,” he said.

The two only met once during the campaign – when they appeared before the Tribune Editorial Board.

“The governor’s gotten nothing done and nothing is going to be different,” Ives said during the editorial board.

“This election has got to be about a revolution,” Rauner said. “My first few years in office, I’ve laid the foundation for dramatic change in my second term.”

“That is patently false,” Ives responded. “Cause you’re not better off today than you were three years ago.”

Rauner’s first term was marked by an epic clash with Democratic Speaker of the House Michael Madigan.

“I am not in charge. I’m trying to get to be in charge,” Rauner said.

Rauner tied his turnaround agenda to signing a budget. The Rauner vs. Madigan fight was almost like a game of chicken but it was no game — vital state social services and public colleges and universities were held hostage.

“My advice to the governor if he’s interested would be stop functioning in the extreme,” Madigan said.

“Somebody just thinks I should sign off on bad policy alone, tax hike alone, pension kick the can, alone with no reforms, no way,” Rauner said.

The feud lasted 736 days – and the state’s backlog of unpaid bills soared.

In the end, Republican lawmakers broke ranks and sided with the Democrats to finally pass an income tax hike. The governor is making taxes a big campaign theme.

“This is a two-by-four slapped across the forehead of the people of Illinois,” Rauner said. “This tax hike will solve none of our problems.”

Unable to win approval for his turnaround agenda, Rauner has campaigned on the historic overhaul of Illinois’ K-12 school funding formula. He said he was intimately involved. It is true the law came after he set up a commission to study school funding, but when an overhaul plan passed the General Assembly, Rauner cited concern it bailed out the Chicago Public Schools District.

“His base has left him,” Ives said.

To defeat Rauner, Ives is trying to activate the far right.

One of Ives’ TV commercials caused a firestorm. Some in the party said Ives went too far.

“I think it’s edgy, absolutely. I wanna know why people are so offended by it?” she said.

Ives said the images are an accurate representation of Rauner’s policies.

Rauner’s spent most of his time looking past Ives and focusing on Madigan and the Democratic frontrunner for governor JB Pritzker, but recently, Rauner started tying Ives to Madigan in a campaign comercial.

Ives, a West Point grad Army veteran, is blasting Rauner over his handling of the Legionnaires outbreak at the Illinois Veterans Home in Quincy.

“What the hell is wrong with this governor? Veterans and their families are getting sick and dying, Governor. Get them out of there now,” Ives said.

The race may come down to money. Some conservative donors have abandoned Rauner for Ives. She’s raised $3.5 million. But Rauner has collected more than $75 million, with more than $50 million coming from the governor’s own fortune.

If Rauner hangs on, he still has much work to do to improve his standing among the right. Ives and others have said they are not willing to commit to supporting Rauner in the fall.

This is Part 7 of a 10-Part series where WGN profiles the candidates running for office.

The story behind this iconic photo of Chicago Bears …

Best gifts for people who are always cold