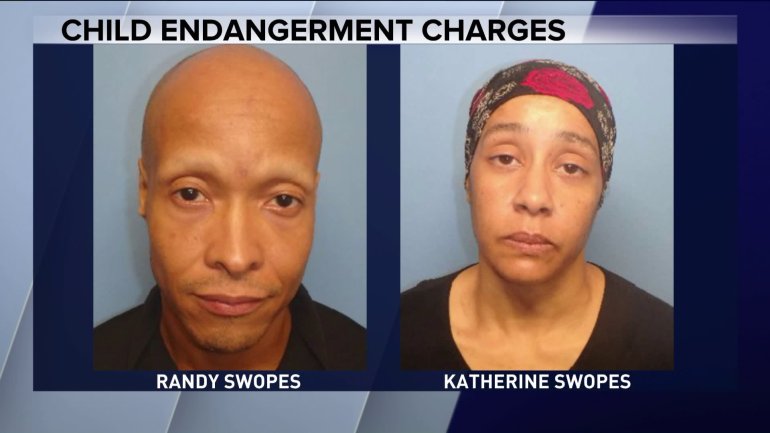 WAUKEGAN, Ill. – A suburban couple is charged with keeping their 10-year-old daughter locked in the basement because they thought she was possessed by a “demon.”

Randy Swopes, 48, and Katherine Swopes, 49, were both arrested and are held on child endangerment and unlawful restraint charges.

Police responded to a home in the 200 block of Liberty Street in Waukegan Tuesday after receiving an anonymous call that someone was held captive in the home’s basement.

Police discovered the girl in the basement living in “poor conditions.

Investigators said they believe in the the last year, the girl  was locked in the basement at night, forced to use a training toilet, and made to shower from a bucket. Investigators said she had little contact with any other member of the family.

The parents told police they believed she was possessed by a “demon.”

The child and her siblings, ages 7, 13 and 15, were taken into protective custody.

In a statement, police said, “Randy is currently registered as an Illinois State Police Murderer and Violent Offender Against Youth Registry participant for a 2008 arrest by the Lake County Illinois Sheriff’s Office. Randy has been registering properly with the Waukegan Police Department annually since 2012.”

TRENTON, N.J. (NEXSTAR) — New Jersey made millions of people eligible to get the COVID-19 vaccine, including smokers, a move that prompted gripes about them skipping to the front of the inoculation line.

The decision has prompted a backlash since it allows residents who smoke cigarettes to get the vaccine before some front-line workers, such as teachers and public transit employees.

The town hall is being held at 1 p.m. on Zoom Saturday. The 2020 highly-publicized cases of Breonna Taylor and Anjanette Young will be discussed. The town hall is a collaboration with the Leaders Network, The Urban Reformers and the Westside Branch NAACP.

WASHINGTON (NEXSTAR) – Metro police are looking for a man accused of crushing an officer in a doorway as a violent mob of Trump supporters forced their way into the U.S. Capitol Jan. 6.

Video shows Officer Daniel Hodges, his mouth bloodied, crying out as he is pinned between a sliding door and the doorframe.

Washington DC ramps up security ahead of Biden inauguration

COVID-19 may eventually be no worse than childhood cold, study finds