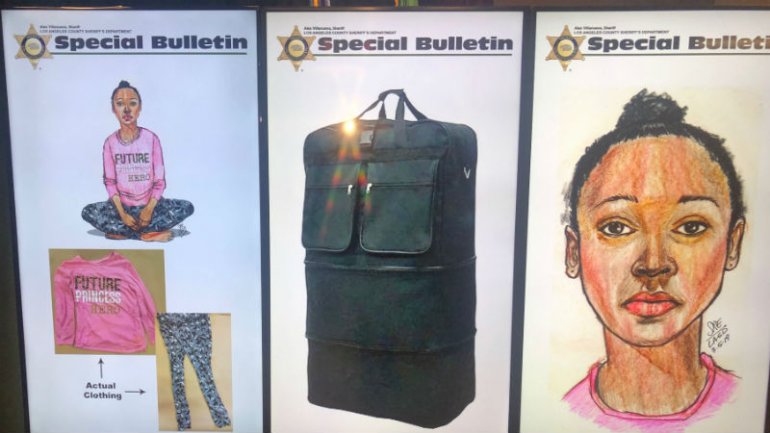 HACIENDA HEIGHTS, Calif. — Authorities asked for the public’s help in identifying the body of a girl found along a Hacienda Heights equestrian trail the day before, according to KTLA.

There are no known motives in the case, which investigators are handling as a suspicious death, Los Angeles County Sheriff’s Department Lt. Scott Hoglund said at a news conference Wednesday afternoon.

Detectives released a sketch of the victim—described as a black girl, possibly 8 to 13 years old, about 4 feet 5 inches, about 55 pounds, and “skinny.”

Investigators said the girl was wearing a pink shirt with the words “Future Princess Hero,” along with blue leggings with pandas on them, and no shoes.

Detectives believe the body was left there sometime in the late evening hours on Sunday, March 3.

The girl was found partially inside a black rolling duffel bag, with the upper part of her body protruding from the bag, which was partially zipped. The girl was not bound or tied up, Hoglund said.

Investigators said there were no obvious signs of trauma on her body. It is not known whether the girl had already died when she was placed in the bag.

An autopsy will be performed to determine the cause of death.

Detectives have reached out to the Department of Children and Family Services, as well as missing child agencies and surrounding school districts, looking for any possible leads.

Investigators urged anyone with any bit of information, no matter how small, to contact the Los Angeles County Sheriff’s Department. Those who wish to remain anonymous can contact Crime Stoppers.

CHICAGO — One man was killed and two people were critically injured after a high-speed crash late last night in East Garfield Park.

The man was speeding west in a Jeep when it hit a metal pillar on the 3100 block of West Lake Street.

CHICAGO — Two Chicago police officers were injured after their SUV crashed on the city’s West Side.

The crash happened around 2:45 a.m. Saturday while the officers were traveling westbound on Chicago Avenue while responding to a call.

After a week of skyrocketing coronavirus cases in the United States, officials are issuing a stark warning this July Fourth: Skip the parties.

If you really have to go, wear a mask, wash your hands and maintain social distancing. And if you must host, try to keep festivities outdoors and save the partygoers' information for future contact tracing if needed.