ORLAND PARK, Ill. —A person is in custody in the Orland Park hit-and-run that killed a teacher and injured another, according to police. 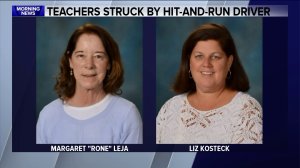 Orland Park police announced Friday night the alleged driver was in custody. The person’s identity has not been released and no charges have been filed at this time.

The incident happened around 8 p.m. Wednesday near the Square Celt restaurant, at 39 Orland Square Drive.

Margaret “Rone” Leja, 61, and Elizabeth Kosteck, 54, had attended the St. Michael School’s Christmas party at the restaurant, and were walking to their cars when they were struck by a vehicle.

The women were transported to Silver Cross Hospital. Leja was pronounced dead at the hospital, and Kosteck was treated and released.

Leja, was a technology teacher at St. Michael School.

Police plan to address the media at a news conference Saturday at 10 a.m.

The investigation is ongoing.

CHICAGO — Chicago police are searching for a man who stole their squad car and crashed it Friday night.

Two officers were going after a possible gun suspect last night in the 7800 block of South Kingston Avenue.

CHICAGO — Hundreds are expected to shut down the Dan Ryan Expressway Saturday to protest against police brutality.

WASHINGTON — The Internal Revenue Service announced Friday that the deadline to claim a $500-per-child stimulus payment as authorized by the CARES Act has been extended.

The IRS is encouraging eligible recipients to use the IRS.gov Non-Filers tool starting Aug. 15 through Sept. 30 to receive the supplemental $500 payments.

NC woman turned 116 Friday and is the oldest person in the U.S.

US Postal Service to raise some prices over holiday season

NC woman turned 116 Friday and is the oldest person in the U.S.