CHICAGO — Hundreds of thousands of people who turned out for a women's march in Chicago have spilled into downtown streets.

Officially, organizers canceled the march portion of the Women's March on Chicago due to overwhelming turnout. But after a rally concluded in Grant Park people began flooding nearby streets, chanting and waving signs protesting President Donald Trump. 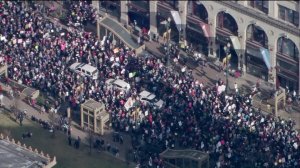 The event is occurring the same day as a march in Washington and similar events in 200 cities, including Springfield and Carbondale.

Donna Martin of Chicago says she came out because "I wanted to be counted."

The 42-year-old pastry chef says the large number of people at the Chicago rally sends a clear message to Trump and his supporters.

Martin says "It means we are powerful. Everything's going to be OK."

CHICAGO — Shedd Aquarium announced the names and sexes of four penguin chicks Wednesday following a nesting and breeding season in May.

The Magellanic penguins contribute to the aquarium's participation in a cooperatively managed species survival plan. The species is currently listed as 'nearly threatened' by the International Union for Conservation of Nature.

Video of 37-year-old Eric Lurry's death was released by Sgt. Javier Esqueda. Esqueda was stripped of his police powers and was placed on administrative leave since June.

WAUKEGAN, Ill. — Waukegan police said an officer fatally shot a teen boy and injured a woman after the car they were in reversed toward the officer.

Police said they were investigating a vehicle on Tuesday just before noon near Liberty and Oak streets. The vehicle was occupied by two people — the teen and the woman.