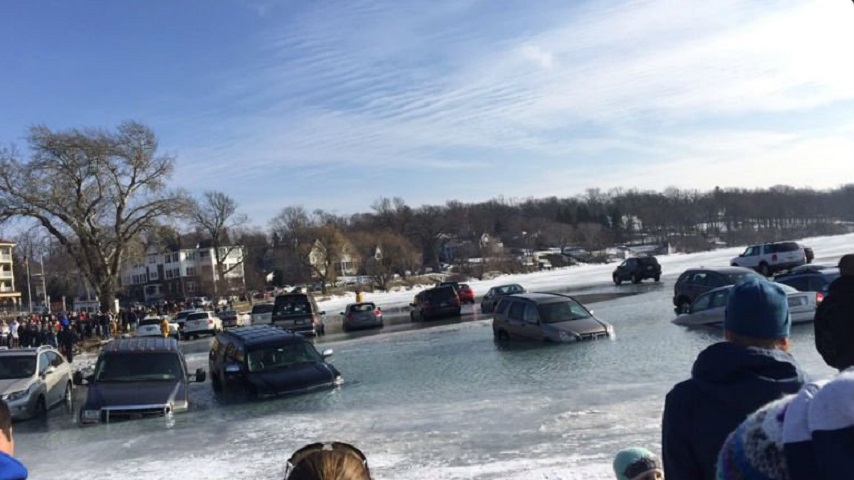 LAKE GENEVA, Wisc. — This is why you don’t park on the lake.

Several cars took the plunge – literally – in Lake Geneva after falling through the lake during the city’s annual Winterfest.

The cars were all parked on the ice for the big event when they started to fall through the ice, says Lake Geneva Fire Department.

No one was in the cars at the time and all the cars have now been pulled out of the water, although some suffered water damage in the engine and in interiors of their cars.

Many of the melting pics were posted on Twitter.

CHICAGO - Police in Chicago are investigating the alleged kidnapping and possibly sexual assault of a female minor in the city's South Austin neighborhood.

According to police, around 8:20 p.m. Saturday, Nov. 27, in the area of Pine Avenue and Lake Street, a four-door black sedan with tinted windows followed the girl from Austin College and Career Academy High School.

CHICAGO — An undefeated youth football team from Chicago's South Side has a shot at a national championship, but they are short of the funds to get there.

Over the summer, President Barack Obama surprised the Southside Wolfpack with a visit, congratulating them on a great season. Since then, their winning journey has continued.

CHICAGO — A pop-up in Andersonville is offering holiday shoppers the chance to get gifts for loved ones while supporting women across the world.

Chicago Fair Trade features fair trade certified goods from across the world, in an effort to support creators worldwide.

13 cases of omicron variant in Dutch testing of travelers

Jussie Smollett: A timeline of events as jury selection set to begin Monday