On Day 3, a tip led the search team to a spot where they were able to hear the 3-year-old calling out for his mother, Craven County Sheriff Chip Hughes told reporters at a news conference Thursday night.

The search team followed his call 40 to 50 yards into the woods, through water, to find Hathaway tangled in vines and thorns, Hughes said.

He was cold, authorities said, but alive and responsive. Hathaway was taken to a hospital, where he is expected to be released on Friday or Saturday.

The boy told deputies that he spent two days hanging out with a bear, according to WNCT. 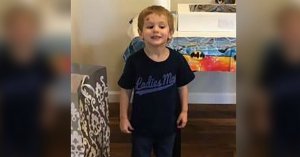 Hathaway was playing with two other relatives in his great-grandmother’s backyard Tuesday, but didn’t come inside when the others did, WTVD reported.

His family searched for him for 45 minutes before calling 911, Hughes said.

Search and rescue teams from across the state immediately came together to brave the treacherous terrain and low temperatures hoping to find Hathaway.

The FBI, NCIS, dozens of volunteers and the U.S. Marine Corps also joined the effort to find the boy, Hughes said.

Hughes said his team was concerned about the “extreme cold” as temperatures dipped near freezing, but against all odds, they found him.

“It was folks giving us tips and leads,” Hughes said. “We hit every one of them immediately and it paid off.”

But, police said, he is in good spirits and has been reunited with his family.

What was really special was how Hathaway brightened up when his little sister was brought in to see him, Hughes said.

Hughes said there is no sign of abduction in this case.

A life alone, but not lonely

The stay-at-home order can be very different when you live alone. The edict for social isolation takes on a whole new meaning.

WGN photographer Mike D'Angelo gets a glimpse into a life lived alone — but not lonely.

Information in the COVID-19 pandemic is evolving rapidly, so to help keep WGN viewers informed with the latest updates, follow our live blog for April 2, 2020.

WASHINGTON — More than 6.6 million Americans applied for unemployment benefits last week — doubling a record high set just one week earlier — a sign that layoffs are accelerating in the midst of the coronavirus.

The stunning report Thursday from the Labor Department showed that job cuts are mounting against the backdrop of economies in the United States and abroad that have almost certainly sunk into a severe recession as businesses close across the world.

A life alone, but not lonely