CHICAGO — The man accused of being behind the wheel in a November drive-by shooting that claimed the life of a nurse appeared in court Thursday.

Armando Lopez, 19, faced a Cook County judge on charges of first-degree murder in the November 12 killing of Frank Aguilar, 32.

In court, authorities painted a picture of an innocent victim, who spent his life helping the disabled as a nurse at Misericordia.

After the hearing, his heartbroken fiancé Lindsey Owens asked that a life of service not be forgotten.

“I just want people to know what a light Frank was to people in their lives,” she said. “He was not just a regular man, he had so many dreams. We were going to get married.” 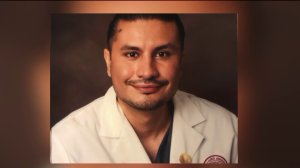 Authorities said the killing appears to be a senseless mistake.

“The victim was not gang involved in any way,” Assistant Cook County State’s Attorney James Murphy said. “And this murder appears to be some sort of mistaken identity.”

Authorities said Aguilar, who was visiting his family in Little Village that night and hoping to do some laundry, was gunned down by members the Latin Kings in a drive-by shooting, as he carried a laundry basket down 32nd Street.

Prosecutors said Lopez was the man driving a Jeep as another person opened fire and established that through public and private surveillance video, cell phone and GPS records.

“This defendant, Lopez, is placed in the driver’s seat of the silver jeep commander by a witness,” Murphy said.

Police said they received a number of tips from people in the Little Village neighborhood. Some shared surveillance video.

Aguilar’s mother, wearing an expression of both grief and gratitude and speaking Spanish, thanked the community for helping find Lopez and bring him to justice.

Owens said the killing ended a life that was certain to help save so many others.

“He wanted to become an emergency room nurse, so he could help people on the front lines, dealing with trauma,” she said. “I just want to ask for justice for Frank.”

“My family is still devastated from the incident,” Aguilar’s uncle Joshua Alcazar said. “We’re hurting and we are still recovering.”

Lopez was out on bond for charges stemming from a police chase he led police on through neighborhoods and expressways, and a weapons violation.

The judge denied bond Thursday and said Lopez was a threat to the entire community.

SPRINGFIELD, Ill. - Illinois is one of 17 states suing the Trump administration over plans to revoke visas to foreign students this fall.

The plan applies to students taking university classes entirely online and some will not have a choice due to their university's decision.

The incident involving an older white man and woman was caught on surveillance video and happened over several minutes.

CHICAGO — The 43rd annual Chicago Marathon has been canceled due to public health concerns related to the coronavirus pandemic, organizers announced Monday.

“It was something we decided for the health and well-being of our participants,”  Bank of America Chicago Marathon Executive Race Director Carey Pinkowski said.

Supt. Brown argues CPD can’t be only answer when it comes to curbing gun violence